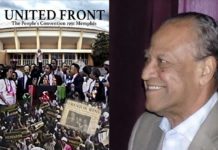 Miss Robbie, of the OWN Network show “Welcome to Sweetie Pie’s,” is suing her son, Tim, over trademark infringement after he opened an eatery called TJ’s Sweetie Pie’s NOHO.

According to the lawsuit, the opening of the eatery, along …

Jelani Maraj, brother to Nicki Minaj, has been accused of repeatedly raping a 12-year-old, and now, the prosecution says, the DNA evidence is against him, as his DNA matches semen found on the victim’s clothes.

NNPAFreddie - 07/27/2016
[VIBE.COM] Today in #blackgirlmagic news, Lunella Lafayette was introduced at the San Diego Comic Con as the smartest person in Marvel Universe. Moon Girl, as she has been aptly named, is 9 years old, black, and from Manhattan, NY. She wears large purple specs and rocks two Afro puffs. Lunella will be featured in the […]
Read more

When I got a press email announcing a new season of Basketball Wives LA, I was legitimately surprised. I’d assumed VH1 decided to take this show out back, shoot it and put it out of its misery to make room for new blood on its programming slate. You know, the humane thing to do. The original franchise, based in Miami and launched in 2010, went on to glory in 2013 after five seasons—two of which were too many. Given its Los Angeles spinoff’s befuddling last season, I thought it was clear to all that it’s time to be like En Vogue and give it up, turn it loose on this show. Who was going to make up the cast? Certainly not any actual wives of professional basketball players at this point, but maybe a woman who got at least three DMs from a ball player on Instagram? What else could these women possibly have to argue about? Yet, after recalling my days in catechism and recently listening to Mary Mary songs chopped and screwed, I decided to give this show another chance and find the answers to these questions. Moreover, I wanted to ponder whether or not this show still has any purpose. So, who is on the show? Malaysia Pargo, Brandi Maxiell, Jackie Christie plus the imports from the now-deceased Miami version, Shaunie O’Neal and Tami Roman all return. Draya Michele gave up on the show midway during its last run, so best of luck to her, the swimsuits and trying to land that Evelyn Lozada-like spinoff. Mehgan James of Bad Girls Club fame is gone, though she promises she’ll return to TV soon. James was probably too much of an insurance risk even by this show’s standard. There are two new cast members: D.J. Duffey, who dates a basketball agent, which I guess technically fits the bill, and Angel Love, a registered nurse who has three degrees and a baby with a Washington Wizards player. Duffey is a Dallas native and play-sister to Brandi, only she doesn’t get along well with Brandi’s BFF, Malaysia Pargo. Judging by the season preview, she will punch you in the face if you force her to. I wonder if she’s from Oak Cliff? As for Angel Love, she is on a “break” from her boyfriend and said that if her man is cheating, she doesn’t want to know about it. She’s basically a very pretty girl with the same lil sad tale we’ve heard so many times on this show. I wish her well in her future endeavors, but Toni Braxton didn’t release “Love Shoulda Brought You Home” for nothing. Learn, girl. What do these women bicker about? The same damn things from the previous season. Listen, it’s cute that we all pretend Shaunie O’Neal can fire her co-workers because she has an executive-producer credit, but that’s not exactly true or all that interesting. Like Royce Reed on the original Basketball Wives, Brandi was not fired for daring to talk slick to Shaunie, so spare us this storyline. Producers could’ve gone on a scavenger hunt in the Shade Room for better material. Malaysia is still gorgeous, though she seems unnecessarily catty. Was this filmed before she received her divorce settlement? You know what? Never mind. I like Malaysia, and she will show up at your event in sweats ready to square up. I’m going to spread positivity with her. Oh, Jackie Christie is still Jackie Christie. We learned that when checking her man for infidelity, she inspects his testicles. Listen, if you have to do a scratch and sniff or grab a measurement cup, you don’t have enough trust in your relationship. Yeah, I’m single, but I’m also not Inspector Gadget with a mate’s junk. Jackie later noted that her first husband was white and she enjoyed the smell of his white hair. To that end, if you wonder whether or not this show still has any purpose, I’m fairly certain I’ve answered. However, I’d like to offer more examples. Judging from the preview of future episodes, 45-year-old Tami Roman is still fighting. If I could play prophet for a second, I predict Tami will one day be on a reality show set at a luxury retirement villa where she’ll be filmed trying to stab a fellow cast member with a butter knife over Jell-O and not putting enough “respeck” on her name. Frankly, Kim Kardashian’s exposing Taylor Swift as Joanne Prada’s rich white cousin on Snapchat was more entertaining than the season premiere of Basketball Wives LA. Like any sitcom, this show has simply outlived its usefulness. Perhaps it’s something to be watched when in need of escapism or stuck in the house during a monstrous thunderstorm, but other than that, I don’t know, beloveds. For me, the thrill is gone.
Read more
1...838485Page 85 of 85