GritGrindGrizz: A FAREWELL TO #50 FOR THE CITY

Lee Eric Smith - 07/06/2017
Ten years ago, Zach Randolph was nowhere close to becoming the face of a franchise, let alone the Memphis Grizzlies. He wasn’t even on the team yet. No, in 2007, the role of “face of the franchise” still belonged to...
Read more

Doc Rivers and the Los Angeles Clippers: Are a Man’s Pride and a Father’s Love Ruining a Basketball Franchise?

The Root - 07/06/2017
Let me preface all of this by saying that I am a diehard Los Angeles Lakers fan. The Clippers will always be the JV squad in this city, and everyone knows it. It doesn’t matter how close they get...
Read more

thegrio - 06/01/2017
According to People magazine, Rob Kardashian, fresh off a relationship with Blac Chyna, is dating “Basketball Wives” star Mehgan James.An insider told Us Weekly that the relationship with James was “fairly new” after the whirlwind romance with Chyna didn’t work out.Kardashian and Chyna...
Read more

thegrio - 04/27/2017
Ilie Nastase believes that he could only have been considered to be racist if he had said toward Serena Williams' unborn child, "Ugly, black baby."
Read more 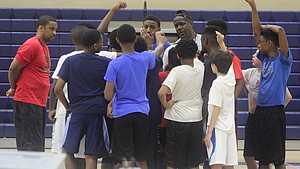