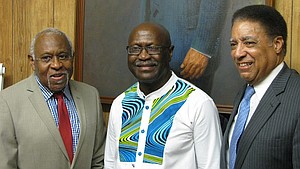 Memphis has a direct link to the film “Amistad” and that connection is one of several intriguing storylines that will be highlighted during WLOK’s 2nd Annual Black Film Festival on Labor Day weekend at the Memphis College of Art.

The film festival will stretch from Thursday, Aug. 31 through Sunday, Sept. 3 and is co-sponsored by FM 105.

An epic slave rebellion drama, “Amistad” opens the feature film portion of the weekend. It will be preceded by a special filmed interview with Dr. Samuel Pieh, who is a direct ancestor of the central character Cinque, the slave who led the historic mutiny aboard the ship of the film’s title.

Memphis native Willard Pugh, who portrayed Harpo in “The Color Purple,” also will be a film festival highlight as he makes a presentation on the impact of the film, which was nominated for 11 Academy Awards and – with much controversy – did not win one. Also punctuating the festival will be the local filmmaker’s showcase on opening night.

Pieh, who was in Memphis this week visiting family, spoke with The New Tri-State Defender during an interview at WLOK. He was working as an instructor at Southwest Tennessee Community College when he became involved with the making of “Amistad.”

“I went to a conference in New Orleans and the director said Debbie Allen was looking for someone from Sierra Leone or someone with any type of relationship to Cinque Pieh. Three weeks later, she called me back and said Steven Spielberg had agreed to make the film,” Pieh said.

Now director of Research and Development at the Summit International Institute in Burundi, his homeland, Pieh’s family ties here and in Mississippi influence his work in Africa, he said, adding that the recent events in Charlottesville, Va. carry a lesson he has always taught.

“I have visited eight African nations, and I tell them that America is one of the best places in the world because they have faced their ugly history and made an attempt to make a change,” he said. “If we can infuse common sense into our education, I think we have a chance to realize Dr. King’s dream for this nation and the world.”

The lineup for WLOK’s 2nd Annual Black Film Festival speaks to the potential of the annual festival, said Levi Frazier, a committee member for the festival.

Levi Frazier Jr., associate professor and theater director at Southwest Community College, said the second year lineup is an example of a great potential future for the festival.

“We’ve grown by leaps and bounds,” said Frazier, associate professor and theater director at Southwest Tennessee Community College. “We were real fortunate to be able to have Willard Pugh come in for us because of the connection ‘The Color Purple’ has to so many people. Not just African Americans, everyone seems to know a line from the film.”

Frazier emphasized the importance of the filmmaker’s showcase.

“There’s so many out here doing great things and we want to reach out to give them a showcase. We hope this will bring more of them together in a cohesive way to give them a strong push.”