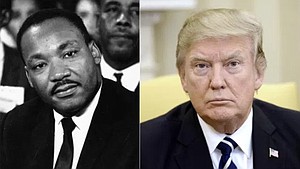 On the anniversary of Dr. Martin Luther King Jr.’s assassination, this is as appropriate a time as any to ask how the slain civil rights leader would react to President Donald J. Trump.

There’s reason to believe Dr. King would respond to Trump the way he responded to the racists, the white supremacists, the Jim Crow segregationists and the bigoted bullies of his day. And he dealt with many of them, from small-time sheriffs and petty local officials to governors and Washington politicians.

Trump is the ideological heir of the Jim Crow official who stood in front of the schoolhouse door, his supporters the descendants of the thugs and hooligans who bashed in the heads of civil rights workers at the segregated lunch counter — or in the streets, using the authority of a police badge, gun and a billy club to terrorize nonviolent protesters.

These days, not unlike the days of the civil rights movement, are filled with great turmoil, uncertainty and danger for people of color, the poor and the vulnerable. The Trump White House, which came to power with the slogan “Make America Great Again,” has utilized what Dr. King called the drum major instinct, “a need that some people have to feel that they are first, and to feel that their white skin ordained them to be first.”

Full-fledged Nazis and white nationalists are running the show from the West Wing, developing policies designed to humiliate and oppress disadvantaged populations and erase the civil rights legacy of the past five decades. Trump is benefiting from the racism and xenophobia plaguing the land and feeding an environment allowing hate crimes to flourish at the same time. And Dr. King would be speaking out against that.

Dr. King had much to say about unjust laws in Letter From Birmingham Jail. He spoke about the moral duty to disobey an unjust law, which a “majority group compels a minority group to obey but does not make binding on itself.” An unjust law such as the Jim Crow segregation statutes “distorts the soul and damages the personality,” he wrote, and “gives the segregator a false sense of superiority and the segregated a false sense of inferiority.”

Trump’s America is replete with unjust laws, with executive orders that target Muslims because of their religion and undocumented immigrants because of their status and Latino ethnicity, all for the sake of white supremacy. Surely King would react vehemently against ICE raids, the rounding up of people like fugitive slaves, deporting them and separating them from their children.

America, King said, “is the greatest purveyor of violence in the world today.” The Trump administration — with its love for tyrants and human rights abusers and a plan to increase funding for the military and for police by decimating social services — has done nothing to disprove King’s statement. Rev. King and his followers withstood police dogs unleashed by two-legged police dogs, as Malcolm X would have said. He would understand too well Trump’s “law and order” regime — which gives deference to police, encourages law enforcement to racially profile black communities, and brands protesters and the press as the enemy.

Let us not forget that King also cared about economics. He spoke of the need for America to “undergo a radical revolution of values” and “rapidly begin … the shift from a thing-oriented society to a person-oriented society. When machines and computers, profit motives and property rights, are considered more important than people, the giant triplets of racism, extreme materialism and militarism are incapable of being conquered.” When he was gunned down in Memphis, Martin Luther King was fighting for the rights of striking sanitation workers and was organizing the Poor People’s Campaign to demand economic justice and human rights to the poor across all racial lines.

What would King make of the Trump cabinet, a mostly white male group, predominantly millionaires and billionaires, with a combined net worth greater than a third of Americans combined, and policies designed to benefit those wealthy cabinet members and their friends? This is the wealthiest cabinet in history, and the worst, King would conclude, with nominees and appointees selected based not for knowledge of their agencies but on their propensity to dismantle them.

Whether the gutting of women’s rights, labor rights, environmental protection, civil rights, voting rights, public education, LGBTQ rights or what have you, the government is not only turning its back on its responsibilities; the government is dismantling itself under Trump. And this would concern King, who pushed the federal government to take a more active role in improving lives and upholding justice.

Trump’s America would look very familiar to Dr. King, a nation that has failed to live up to the lofty rhetoric found in its Constitution. And African-Americans still have that blank check that came back marked “insufficient funds.” Then and now, King would see a country crying out for justice.