By Maya A. Jones, The Undefeated 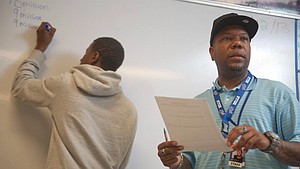 May 8 kicks off National Teacher Appreciation Week, a celebration set aside to formally recognize educators. Traditionally, the observance occurs the first week in May. This year the annual celebration was moved, so The Undefeated will preview the week with inspiring stories centered on education, and next week we will continue with highlights of teachers and those who work in the field.

The relationship between black students and black teachers is saving academic careers, and a new study is out to prove it.

The study, The Long Run Impacts of Same-Race Teachers, conducted by the IZA Institute of Labor Economics, found that low-income black students who have had at least one black teacher during their early academic career have higher chances of graduating from high school and attending college.

Out of the 100,000 black students entering third grade in North Carolina public schools between 2001 and 2005 whom the study focused on, nearly 13 percent dropped out of high school while the remainder of students finished high school, but expressed no interest in attending college. The students who had at least one black teacher throughout those years were less likely to drop out, and more likely to express interest in college (18 percent). Black male students from low-income families who were exposed to at least one black teacher were the highest group to express interest in college (29 percent).

“Black students matched to black teachers have been shown to have higher test scores, but we wanted to know if these student-teacher racial matches had longer-lasting benefits,” said Nicholas Papageorge, the study’s co-author and an assistant professor in the department of economics at Johns Hopkins. “We found the answer is a resounding yes. We’re seeing spending just one year with a teacher of the same race can move the dial on one of the most frustratingly persistent gaps in educational attainment — that of low-income black boys. It not only moves the dial, it moves the dial in a powerful way.”

To validate their most recent findings, the study’s researchers aligned their work with that of Project STAR (Student-Teacher Achievement Ratio), a study conducted in Tennessee in the 1980s that focused on a class size reduction. Black students who entered kindergarten were randomly assigned to various class sizes, and their learning patterns were monitored. The researchers’ findings about black students paired with black teachers were consistent with their own research, as 15 percent of black students in Project STAR who had at least one black teacher from kindergarten to third grade were less likely to drop out of school.

Papageorge says ensuring the success of a larger number of low-income black students is as simple as schools seeing to it that these students have access to at least one black teacher, beginning early in their academic careers.

“This isn’t a situation where students need two, three or four black teachers to make a difference,” Papageorge said. “This could be implementable tomorrow. You could literally go into a school right now and switch around the rosters so that every black child gets to face a black teacher.”