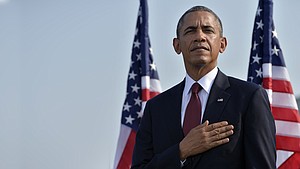 For years now, I have told my friends that you were destined to become the greatest ex-president in U.S. history.

The knee-jerk reaction was that I was counting down the days until the end of your term. Nothing could be further from the truth. Like the roaring crowd that greeted you for your farewell address in Chicago on Jan. 10, I would have been right there chanting for the impossible: “Four more years! Four more years!”

No, I was in no rush for you to leave the Oval Office. But I am SO looking forward to what you do next. Because while I know you will become the greatest ex-president in U.S. history, I did not know we would NEED you to become that.

But we do. Your work is not yet done, Mr. President.

Former presidents occupy a unique place. They still carry the gravitas of the office, but without the weight of governing itself. They are celebrities but still citizens. They have a perspective on America and the world that only other members of that highly exclusive group share. Unfettered with the need to win an election or to get something done in Congress, they can speak up and speak out.

That’s what we need from you, President Obama. Keep talking. Keep reminding us what America can be. Keep inspiring us to get involved and stay involved. Keep being Barack Obama.

It’s funny: You caught a little flak for saying that you would have won a third term if the Constitution allowed it. As our new president likes to do, he griped on Twitter about that.

“President Obama said that he thinks he would have won against me.” Trump tweeted. “He should say that but I say NO WAY! – jobs leaving, ISIS, OCare, etc.”

To me, that’s just further evidence of our incoming president’s grasp on reality — or lack thereof. Let’s put this all in perspective. Almost 3 million more Americans voted for Clinton than Trump. He would do well to just remember that — regardless of the Electoral College, more people voted against his presidency than for it.

But here’s the thing: Clinton lost because not enough Obama voters turned out to vote for her. This isn’t Trump’s America. This isn’t even Hillary Clinton’s America. It’s still YOUR America, President Obama — as evidenced by your 60 percent approval rating just days before you leave office. Compare that with Trump’s 32 percent approval rating — before he’s even sworn in.

Look, I’m all for giving a guy a fair chance, including President Trump. Back in 2000, even as I’d hoped for an Al Gore presidency, I was still hopeful that George W. Bush’s promise of “compassionate conservatism” would pan out. He eventually proved to be as incompetent as many of his opponents feared.

Meanwhile, Donald Trump has given us so many reasons to lack faith in his presidency. The too-cozy-for-me relationship with Russia; the late-night unprovoked tweets; the reckless disregard for how those tweets can affect policies, economies and relationships around the world; his cabinet nominees; his (lack of a) plan to replace Obamacare; his obvious conflicts of interests . . . Yikes, I could keep going — which is only slightly less troubling than the fact that so many of his supporters don’t seem to care about any of that.

But there you were in Chicago, Mr. Obama. Reminding us of the best of America. Politely but firmly calling out partisanship in politics; telling us to get out of our comfort zones and look for common ground with other Americans. There you were, in front of God and everybody, getting emotional while you talked about your beautiful, brown-skinned wife, and bragging on your daughters. There you were challenging us all, regardless of how we voted, to get engaged and stay engaged with shaping our democracy.

There you were, at the end of your presidency, just like you were at the beginning — inspiring hope, rallying America to change.

My hope, Mr. President, is that you take a few weeks off, decompress, kiss your wife, hit the links, play a few rounds of golf. Get some rest.

But when you come back, I’m praying you return to campaign mode. Unleashed from political office, I’m hoping that you will use your gravitas, your humor, your wisdom, your oratory, your common sense to speak to the soul of our great nation. I’m asking you to lead a movement of the people, like you did in 2008.

I’m not calling for you to lead a coup. I’m asking you to speak to the best of America, to remind us that regardless of skin color, religion, party or state, we are all Americans.

We are at a critical time in our nation’s history. Given the contentious nature of the campaign, the KNOWN tampering by Russia and his pre-presidential behavior, it’s no stretch to say that a Trump presidency could cripple our nation for decades to come — unless We The People step up and say otherwise. We The People need someone to remind us we can do that. President Obama, we need YOU to remind us we can do that, Mr. Obama. Consistently. Frequently.

What will your legacy be? I believe it won’t take long for America to appreciate the Obama Administration. I believe you’ll go down as one of the greatest American presidents ever, mentioned in the same breath as FDR, JFK and Ronald Reagan. But I dare say that your presidency won’t be the biggest part of your story, Mr. President.

Your legacy is still being written.

Lee Eric Smith is an associate editor of The New Tri-State Defender. He’s also an author, speaker and the creative force behind the online project “A Message From God.” Visit www.amessagefromgod.org.