By Stephen A. Crockett, The Root 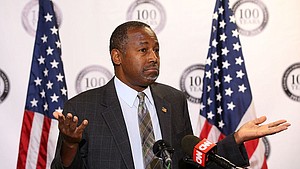 Someone, please go get Uncle Ben; he’s out here making an ass of himself again.

One of the most renowned surgeons in the history of America, who is now the head of the U.S. Department of Housing and Urban Development, was giving a speech to staff when he referred to slaves as immigrants.

“That’s what America is about, a land of dreams and opportunity,” Carson said, USA Today reports. “There were other immigrants who came here in the bottom of slave ships, worked even longer, even harder for less.”

So far, with this dumb-ass administration, the secretary of education has claimed that historically black colleges and universities were the real pioneers in school choice, and now we have the secretary of HUD referring to slaves as immigrants.

Oh. Actor Samuel L. Jackson heard about it. He was NOT happy. And Sam being Sam . . . well, there was language and name-calling . . . If you want to see it, click here: