Community L.I.F.T. has commissioned Good Jobs First to research national best practices from economic development agencies in four cities. The group is making it a call to action for the Memphis area to “seize this moment to intensify our ongoing efforts to bring economic opportunity to neighborhoods across Memphis and Shelby County.”

Community L.I.F.T. (Leveraging Investments For Transformation) is the result of a citywide planning process called Greater Memphis Neighborhoods (GMN). Its focus is on revitalizing neighborhoods through strategic investments in the areas of human capacity-building and economic and community development. The goal is “sustainable thriving communities.”

A release about the group’s best-practices study dubs Good Jobs First as “the preeminent economic development policy resource and research center in the nation for grassroots groups and public officials.”

The research will focus on economic development agencies similar to Memphis and Shelby County’s EDGE (Economic Development Growth Engine) in the cities of Atlanta, Detroit, St. Louis and New Orleans. It is expected to yield an analysis of governance, structure, activities/programs and funding models.

And while some may not see the phrases neighborhood-level and economic development as going together, Eric Robertson, president of Community L.I.F.T., wants to change that by broadening the conversation.

“So often in Memphis we define economic development as the recruitment and expansion of companies,” Robertson said in an interview with The New Tri-State Defender. “What L.I.F.T. is trying to do is introduce a broader definition that is accompanied by a broader set of strategies.”

And this: how the community can revitalize commercial and industrial corridors in the inner city.

The study will include an analysis of the respective roles of and relationships between economic development agencies and local chambers of commerce in the target cities.

Expected to be complete by mid-August, the report will be made available to elected and government officials, economic development leaders, community leaders and concerned citizens in economically distressed neighborhoods.

Community L.I.F.T. officials cite several reasons why the study is needed, including that there are several neighborhoods in Memphis that have not received significant investment in more than 40 years and have unemployment rates over 50 percent.

Revitalizing more neighborhoods and adding jobs within the urban core, Community L.I.F.T. says, will help boost the Greater Memphis area’s population over time and, ultimately, help to grow the tax base.

“To match the scale of our need (greater Memphis is the poorest MSA in America), an economic development model that addresses the needs of all citizens in all neighborhoods – one that connects place and economic development and matches opportunity with assets – is essential for progress,” is needed the group asserts.

Organizations such as EDGE or development finance agencies (DFAs) are noted as a major source of capital to grow and create jobs and spur economic and community development in urban areas. If EDGE and other development entities aren’t positioned to play a leading role in economic development, the city’s potential to effectively implement the growth strategies in Memphis 3.0 will be limited, according to Community L.I.F.T.

Memphis 3.0 is a two-year effort to create a comprehensive plan. The process includes identifying issues, stating goals, collecting information, assessing conditions, creating a plan that can be carried out, evaluating alternatives, adopting the plan and reporting to the public.

From the Community L.I.F.T. perspective, a more comprehensive economic development system will help to attract high-growth companies and better position Memphis/Shelby County with a dense urban core and quality neighborhood options that they will require.

The Community L.I.F.T. research wasn’t commissioned as a criticism of EDGE or the Greater Memphis Chamber.

“We recognize that EDGE has recently begun to do more for neighborhoods, particularly with its Inner City Economic Development (ICED) and Community Builder PILOT programs,” the Community L.I.F.T release states. “We hope to broaden our local understanding of economic development to include policies and practices that bring economic vitality to neighborhoods and not only those that aim to recruit and retain large companies.

“Community L.I.F.T. is adding its voice to the call for Memphis/Shelby County to take an aggressive economic development approach. In addition, we are issuing a new call for our community to invest resources so that we (Memphis/Shelby County) have the capacity to do so.”

The group wants to bring attention to what is termed current misalignment and capacity gaps in economic development while identifying opportunities for improvement in approaches that have exacerbated the decline and disenfranchisement of Memphis’ distressed neighborhoods.

Phil Trenary, president and CEO of the Greater Memphis Chamber, said the organization is also interested in promoting the expansion of women- and minority-owned businesses as a form of economic development.

“We have experienced some great momentum and growth, especially with our women- and minority-owned businesses,” Trenary said in a written statement. “If we can capitalize on that momentum, we can truly accelerate that trajectory. We can get more people in good paying jobs and create more opportunities for our citizens in every neighborhood in this city.”

The Greater Memphis Chamber has commissioned third-party comprehensive analysis of the economic development environment in Memphis and Shelby County to examine how the process, policies and procedures being used compare to peer cities.

That environment includes the work of the City of Memphis, Shelby County Government, EDGE, the Greater Memphis Chamber, Tennessee Economic and Community Development and other partner agencies.

“We’re looking at the whole marketing and sales process from top to bottom,” a statement about the analysis emphasized.

The chamber – with the support of a wide range of public and private leaders – also has commissioned a study by Mass Economics to identify key sectors for growth. The goal of the study is information about which business clusters provide the best growth opportunity given the region’s collective assets. 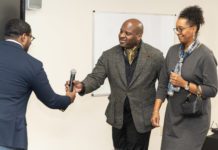