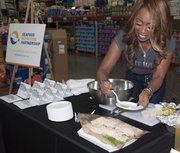 Neely and Johnson were the hosNeely and Johnson were the hoss last Saturday (Oct. 24) of a “Chat and Cook” session held in the meat section of Sam’s Club at 7475 Winchester Rd. It was part of National Seafood Month and the Seafood Nutrition Partnership’s (SNP) three-year national public health education campaign targeting Memphis and 8 other cities.

The SNP is a 501 (C) (3) nonprofit whose mission is to “inspire a healthier America through partnerships that raise awareness about essential nutritional benefits of eating seafood.”

A while back, Neely signed on to co-chair the initiative, joining former NBA star forward Detlef Schrempf, who was in Memphis last year helping to lay the foundation for health consciousness through seafood.

Neely’s energy level – yes the same energy level she brings to her TV appearances – takes the Seafood Nutrition Partnership to, well, another level.

“Today we are going to show you guys an easier way and a healthier way to eating seafood,” she said, taking to the mic and turning that section of Sam’s Club into a stage. “I know there are a lot of times you feel like seafood is hard to eat. Is it clean? Can I handle it?”

Then she went on to make the case for replacing two weekly meals with seafood. And she had help. Sam’s Club has developed a cooking bag that Neely and Johnson showed could make cooking salmon way simpler than many may think.

All while tasting good.

Johnson took the lead on the preparation. “It (the new Sam’s cooking bag) makes it simple and easy and has all your times on here,” she said. “It’s perfect for seafood. You open your bag, season up your stuff and pop it in the microwave.”

Neely drew passersby in for the presentation, telling them the bag makes salmon a lot flakier.

“I ask anybody standing here, where can you cook a meal for 20 minutes at 400 degrees with some veggies on the side, throw it on the platter, whip it up and be ready to eat? Sam’s club is making it easier for moms, busy people, people on the go. But you’re also eating something that’s healthy and great and good for your heart. It’s all about being heart healthy.”

Directing people to the seafoodnutrition.org website, Neely said that’s the home for recipes and information and the place to take the heart healthy pledge.

“You commit to eating two meals of seafood. That’s not hard to do.”

Neely and Johnson talked up the value of partnering with others on the journey to better health and maintaining good health.

Calling for the music and getting the party started, Neely encouraged those listening to ease up on fried foods. “In Memphis, if you walk slow enough, someone might fry you,” she said, talking about Memphians habitual tie to eating fried foods.

The bag can be used in both a microwave and a traditional oven.

Neely said getting more people to eat seafood is really about making a mindset shift and then a lifestyle change.

She’s a witness to what can happen to the body by making such shifts and changes, along with exercise. She’s 50 and slim, having transformed her appearance.

“It’s good to get those Omega-3 acids in our body, which contributes to heart health,” she said. “It’s amazing that people don’t think (more) about their heart. You have to put good things into your body to get good things back. That’s what this partnership is all about.”

Radio personality Mark Stansbury just happened to be at Sam’s when Neely and Johnson struck up the chat-and-cook session. He had one thing in his basket – salmon.

“I eat salmon all the time…for about three years,” he said. “My wife said it was healthy and you need to eat healthy. …”

Tangela Wray also happened upon the cooking demonstration while shopping. “I do eat salmon…for the Omega 3. I’m just getting into it,” she said.

“Being a woman of a particular age you start to lose some of the vitamins in your body,” said Wray. “I knew I needed to replenish.”

Snacking on a sample from the demonstration, Wray said, “It is very flaky and tender. …I think the bag and time (are plusses). If you are not used to preparing fish, you can overcook it. This gives me an exact time.”

As for getting the info from chefs Neely and Johnson, Wray said, “Fabulous,” noting that Neely is in her age bracket.

“She lost a lot of weight and she looks phenomenal. I want to be on her routine.”