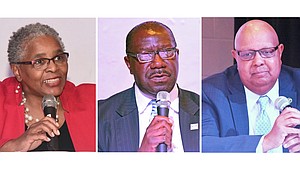 The need to probe for solutions at a forum called “Black On Black Crime in Memphis” produced feelings no less strong than the ones generated by those thoroughly disgusted with the gathering’s title.

The forum was held on the evening of April 6 in the Little Theatre on the campus of The LeMoyne-Owen College (LOC), Memphis’ only HBCU (historically black college and university).

The pushback flared on social media, particularly on Twitter, where now-freelance journalist Wendi C. Thomas was out front in calling out individuals and institutions she said were perpetuating a myth.

“Enough with the racist myth of ‘black-on-black-crime,’” Thomas posted, adding that it was a “racist invention” and supplying stats to buttress her case.

“I wish the people that are talking on the Internet would have shown up, and I guarantee you they would have been enlightened,” Cole said on Tuesday during an interview with The New Tri-State Defender. “They would have found that there was absolutely nothing negative that came of it. They could have even offered their opinion about the forum’s name there.”

Cole said the forum’s name was chosen because “it was appropriate to what is going on in Memphis, and particular in that zip code, 38126. There are horrible things happening in this city and this nation and we feel it was a necessary conversation to have.

“The purpose was to have a healthy dialogue for people to share and for them to take back solutions they could share.”

The weekend Internet storm in reaction to the black-on-black crime label was a reflection of ongoing criticism and concern in multiple quarters in myriad parts of the country.

For her part, Thomas looped former Mayor Dr. Willie W. Herenton and Mayor Jim Strickland into the myth-perpetuating category, referencing comments Herenton made earlier in the year at a prayer breakfast hosted by Strickland.

And she took the TSD to task for its headline advancing the forum: “LeMoyne-Owen College panel to probe black-on-black crime.”

“How can one report on or advance an event without calling the event by its formal name? Do you suggest we take editorial liberty in calling the event something different than what it’s organizers named it? Our goal in this piece was to inform our readers about the event not editorialize about the merits of the notion of ‘black on black’ crime as we referenced it in the advance. I happen to agree with your premise and believe we should and are working to change the language and challenge the thinking, that advance was simply a presentation of the pertinent facts/details of the event not an intentional or blind perpetuation of the ‘myth.’’’

WREG News Channel 3 Anchor April Thompson moderated the panel. She recounted her encounter with a fourth grader at a Frayser after-school program.

“She was asked to write a report on the three things that were the most important in her life right now,” Thompson said. “Number one for her was that her mom get her car fixed. Number two was not getting shot. Her third was getting an education.

“That’s the reality of our community,” Thompson said. “Our young people are living amongst crime and fearing for their lives at nine years old…How did we get here and where are we headed?”

The panel’s professionals brought many topics to light.

“We live in a community that is 68-percent African American. Thirty percent of that population lives below the poverty level. Less than 20 percent of those have a college degree. Even our school superintendent tells us that 30 percent of his students’ family income is less than $10,000 per year,” he said.

“Then you add a proliferation of guns that are readily available to people (and) you have what I call the perfect storm. …They begin to solve their problems with violence. Just this year alone, 33 of the 45 murders as of March 27th were African-American men.

“Typically the age is around 30 years old, unemployed and undereducated,” Collins continued. “Most of them have criminal records and Dr. Stewart will note that some of them have had trauma in their lives.”

Stewart is the first African-American woman to serve as president of the American Psychiatry Association.

“I believe a public-health approach and not a law-enforcement-directed approach really gets to the root of what is going on,” said Stewart, whose participation also was roundly decried by Thomas on social media.

“This is not just my own thinking. I can show you the reports and the studies that show you where they grow up in homes and communities where violence is the primary interaction of their lives. Not play, not socialization, not a birthday party, not an after school program, but violence.”

“Go tell your church pastors that you’re tired of seeing your tithes and offerings going to X, Y and Z. You want to see some things done in your community,” he said.

Referring to activists’ shutdown of the Hernando DeSoto Bridge last July, Brown said, “When we sat with the police officers after the incident on the bridge, the question was posed, what can the church do?

“He showed us all of the churches in 38126, then began to overlay all of the crimes. And guess what? All of them happened right around the church.

“But we continue to stick our nose in the sand.”

Fox: “Self-respect is a starting point. It begins with self-esteem. It starts on two perspectives – one, how we see ourselves; two, how others view us. When we are dealing with our self-respect and our self-esteem, we’re dealing with an issue of social acceptance. We can provide our spiritual beliefs in the home, and outside the home, to the best of our ability, but it takes an entire community to instill positive factors in an individual. But when certain individuals desire to be accepted, it depends on what groups this individual hangs around or has been exposed to.”

Gupton: “When they come to me for correction they’ve been sentenced, they’ve gone through all the trauma and they’ve had time to realize the mistakes they’ve made and the behavioral choices they were faced with. With good treatment they can make better choices and that is what corrections is all about. We’ll never be the only solution.

NOTE: The forum discussion is posted on LOC’s Facebook page.