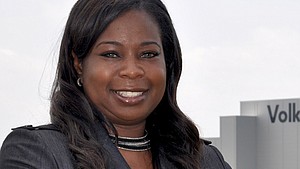 As the Supplier Diversity Manager at the Volkswagen Group of America’s plant in Chattanooga, Tenn., Edkedsha Mathis said she relies on a concept called the three A’s: Aim high, apply yourself and achieve your goals.

Mathis, whose supplier diversity position falls under the company’s purchasing department within the Chattanooga Plant location, which employs about 2,800 workers, said that her concept is rooted in the philosophy that credibility is built on results and leaders that achieve by doing and not just advising.

“As a young adult venturing into the business world, I had a road map and goals. One year, three years, five years and 10 years,” Mathis said. “That’s something you need to stick to. Make two road maps, one for yourself on a personal level and a professional one to present your leadership as the path that you want to follow.”

For Mathis – whom colleagues and family members affectionately call “KeeKee,” – mentoring and offering advice to young women, minorities, and anyone within the diversity community is one of the traits she’s demonstrated as she’s helped Volkswagen’s Supplier Diversity Program remain one of the most successful in the world.

Born and raised in Chattanooga, Mathis has been with Volkswagen for eight years and she has more than 20 years of experience in purchasing, which includes supporting as a regional buyer, service buyer, supply chain support, key user for all of the purchasing systems and lean management.

Previously, she worked for 13 years as a buyer for the Wrigley Company.

“There’s nothing to fear, but fear itself,” she said. “The only barrier between yourself and success is you. No one can stop you from what you want to accomplish, but you.”

The powerful principles of diversity and inclusion — which promotes superior performance and competitive advantage — has helped Volkswagen Group of America create an environment where everyone can feel respected and appreciated, company officials said.

Mathis said much of her job is spent traveling and engaging with minority and diverse suppliers as executive leaders in the company participate each year in a diversity strategy conference to help shape Volkswagen’s diversity initiative.

Through Volkswagen’s Diversity Outreach initiative, the company has continuously sought opportunities to partner with community and diversity based organizations like the National Urban League, Out and Equal, the National Association of Minority Automobile Dealers (NAMAD), the Tri-State Minority Supplier Diversity Council (TSMSDC), National Minority Supplier Development Council (NMSDC), and The Chattanooga Chamber.

“I closely coordinate with buyers and purchasing managers to ensure we have inclusion of our diverse suppliers within our purchasing processes,” said Mathis. “Diversity represents a different range of categories including minority-owned, women-owned, veteran-owned and LGBT.”

Mathis continued: “And, it’s not only identifying these suppliers, but mentoring and developing them to make sure they have the capabilities needed by Volkswagen.”

For instance, Volkswagen’s commitment toward supplier diversity is almost like no other company. If Mathis and, or, other Volkswagen officials find that some minority suppliers don’t possess the capability, Mathis helps to develop those suppliers to gain the experience and ability to become a Volkswagen supplier.

“My job is to support them. In most cases [request for quotations] have gone out when we’ve had really small businesses that wanted to participate in the bidding process,” Mathis said. “I may tell them they can go through the process, see what the scope of the work entails, and they will know, in the future, how they can build up their capacities to submit a proper proposal that meets the requirements.”

Mathis said that it’s also important to provide diverse suppliers the tools and feedback needed to be successful as Volkswagen suppliers and community members. Those tools include mentoring, training, feedback (positive and opportunities for improvement), networking, and one-on-one meetings with responsible buyers and business units.

Mathis said that participating in the Center of Excellence (COE) at TSMSDC is a great way for suppliers to improve their services by identifying their strengths and weaknesses.

She also coordinates several best practices that include increasing supplier diversity program awareness within the organization, working to keep top leadership committed and informed about the importance of the program, mentoring suppliers, and training new and current suppliers.

“I can help suppliers even if it means partnering with them with a larger business that’s willing to work with them, because a larger business can be used as mentors,” said Mathis. “We are always looking for partners throughout the year and there’s no cut off on identifying such suppliers, which is why I attend trade shows and trade fairs nationally.”

At Volkswagen, more than 10 percent of production purchasing has been awarded to minority-owned businesses and 10 percent for non-production in 2016. Mathis said there are always opportunities for suppliers, however, they must be properly certified, registered, and be competitive.