By Andre Perry, Ph.D., The Root 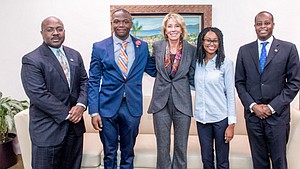 In a clearly calculated move, Betsy DeVos’ first stop to a postsecondary institution as the newly minted U.S. secretary of education was to an HBCU—Howard University, “the Mecca” of black education in the United States.

Students and outside observers wasted no time serving up pointed questions and severe rebuke, but make no mistake:

Every single word needed to be said.

Undergrads at historically black colleges and universities have a right to be gun-shy over a Department of Education drive-by because the core values these schools hold dear are not bulletproof.

Most importantly, DeVos’ visit could foretell a targeted and institutionally violent strategy that deserves our undivided attention.

We have only to look at the invitation extended to presidents of HBCUs by Sen. Tim Scott (R-S.C.) and Rep. Mark Walker (R-N.C.) on behalf of other GOP members of Congress to meet with them later this month.

On the surface, this looks like the seat at the Trump administration’s table that some black people feel is necessary, but students must demand that all policies recognize black lives on and off campus. Anything less is inconsequential and potentially dangerous.

The past eight years have shown this to be true.

The changes made under the Obama administration to the Pell Grant and PLUS loan programs often proved callous to the needs of students at private HBCUs. The negative impacts have been far-reaching, and these institutions are just starting to recover.

Nearly three-quarters of black students qualify for federal Pell Grants; put simply, students at HBCUs need less loans and more grants. But under the Obama administration, Pell Grant awards were eliminated for summer semesters, and the Department of Education began denying loans to parents with debts in collections or that were charged off.

The Obama administration’s actions punished students who were ostensibly already in financial crisis. Though changes were eventually negotiated and later enforced, the damage was already done.

Many universities took significant financial blows during a period when other institutions with lower percentages of low-income students were recovering from the Great Recession. Thousands of black students were denied access to HBCUs.

Though the Obama administration did push forward a slew of policies aimed at protecting vulnerable low-income students from predatory colleges and universities—institutions like Trump University—past is still prologue. This means that students at HBCUs should be particularly guarded about DeVos’ visit and wary of her intentions.

They must resist and not allow HBCUs to take hush money while Donald Trump’s policies simultaneously threaten black collegians when they step off campus.

There may be substance that follows the meeting, but for now, the survey says that Howard University was put in the same position as Steve Harvey and Kanye West.

We don’t know what DeVos said to Frederick. But if he didn’t respond by telling her that although the country’s 105 HBCUs make up only 3 percent of colleges and universities, they produce 27 percent of African Americans with bachelor’s degrees in STEM (science, technology, engineering and math) fields, then we know he didn’t say enough.

If Frederick didn’t remind DeVos that HBCUs conferred one-fourth of the bachelor’s degrees in education awarded to African Americans, despite a teacher-to-school pipeline rusted by systemic racism, then we know he didn’t say enough.

HBCUs offer the country a lesson that black students from all income levels deserve the cultural support that historically black institutions provide. These students need fiscal backing, yes, but they also need protection from predatory colleges that see students only as financial aid packages.

DeVos has been a strong supporter of for-profit primary and secondary schools, particularly in Michigan. What she has not proved to be is a supporter of strong accountability, which many low-income black students need.

Federal involvement through numerous title programs originating from the Elementary and Secondary Education Act of President Lyndon B. Johnson’s war on poverty came about because states showed an inability to distribute educational resources justly and equitably.

Similarly, title programs from the Higher Education Act, like Title IX, protect women and other vulnerable populations from the threat of sexual harassment discrimination.

When pressed at her confirmation hearing about whether she agreed to uphold the 2011 Title IX guidance of the Office of Civil Rights, which is located in the Department of Education, in relation to sexual assault on campus, DeVos equivocated: “I would look forward to working with you and your colleagues and understand the range of opinions and understand the issues from the higher-ed institutions that are charged with resolving these and addressing them.”

DeVos didn’t say enough, which is a tell-tale sign that she won’t do enough. We must all demand the right answer.

Be clear: Resisting DeVos is bigger than college.

She must hear that all black lives matter even when the photo ops—and cellphone footage—disappear.

It should come as no surprise that Frederick took the meeting, as most college presidents would. But the school’s administration should also stand by its students in protest.

Undergrads and graduate students at HBCUs are more than collegians. They are immigrants, women and citizens harassed by police.

The Trump administration knows that HBCUs represent black people, and throwing HBCUs a bone won’t make the needs of “the blacks” go away.

DeVos and others may come to historically black campuses prowling about for favor, but we have to let her know: