ATLANTA (AP) — The Rev. Joseph E. Lowery fought to end segregation, lived to see the election of the country’s first black president and echoed the call for “justice to roll down like waters and righteousness like a mighty stream” in America.

For more than four decades after the death of his friend and civil rights icon, the Rev. Martin Luther King Jr., the fiery Alabama preacher was on the front line of the battle for equality, with an unforgettable delivery that rivaled King’s — and was often more unpredictable. Lowery had a knack for cutting to the core of the country’s conscience with commentary steeped in scripture, refusing to back down whether the audience was a Jim Crow racist or a U.S. president.

“We ask you to help us work for that day when black will not be asked to get in back; when brown can stick around; when yellow will be mellow; when the red man can get ahead, man; and when white will embrace what is right,” Lowery prayed at President Barack Obama’s inaugural benediction in 2009.

Lowery, 98, died Friday at home in Atlanta, surrounded by family members, they said in a statement. 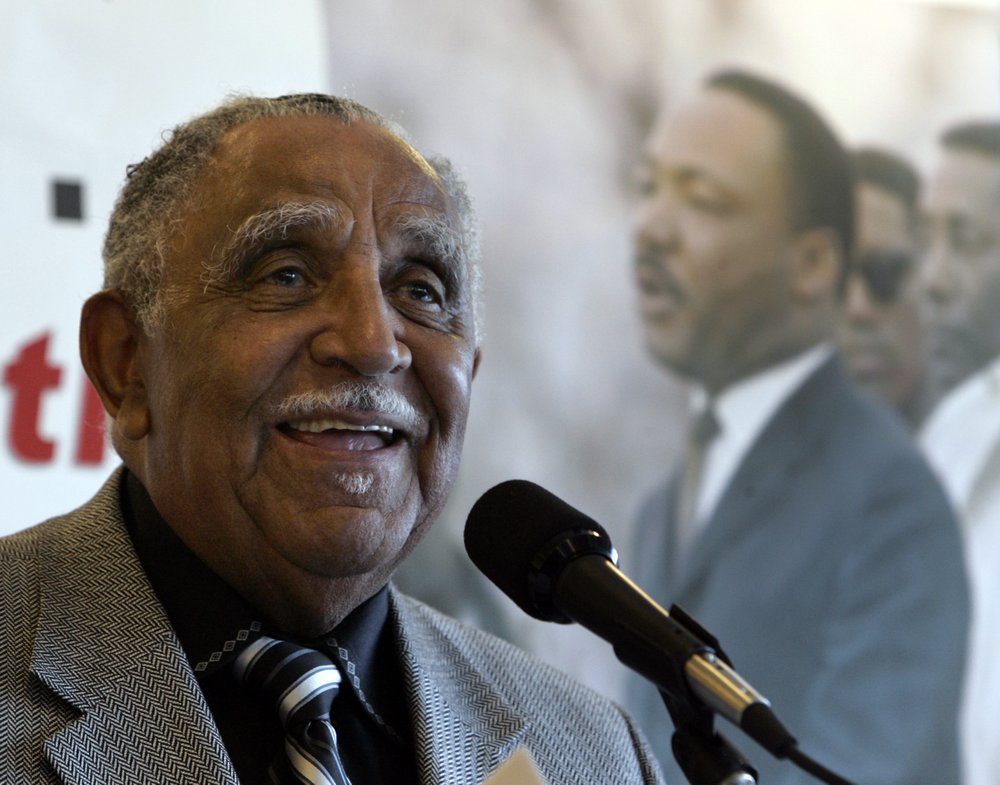 Lowery speaks at the National Press Club in Washington on July 2, 2008, with an image of Martin Luther King Jr. in the background (AP Photo/Susan Walsh, File)

He died from natural causes unrelated to the coronavirus outbreak, the statement said.

“Tonight, the great Reverend Joseph E. Lowery transitioned from earth to eternity,” The King Center in Atlanta remembered Lowery in a Friday night tweet. “He was a champion for civil rights, a challenger of injustice, a dear friend to the King family.”

Lowery led the Southern Christian Leadership Conference for two decades — restoring the organization’s financial stability and pressuring businesses not to trade with South Africa’s apartheid-era regime — before retiring in 1997. 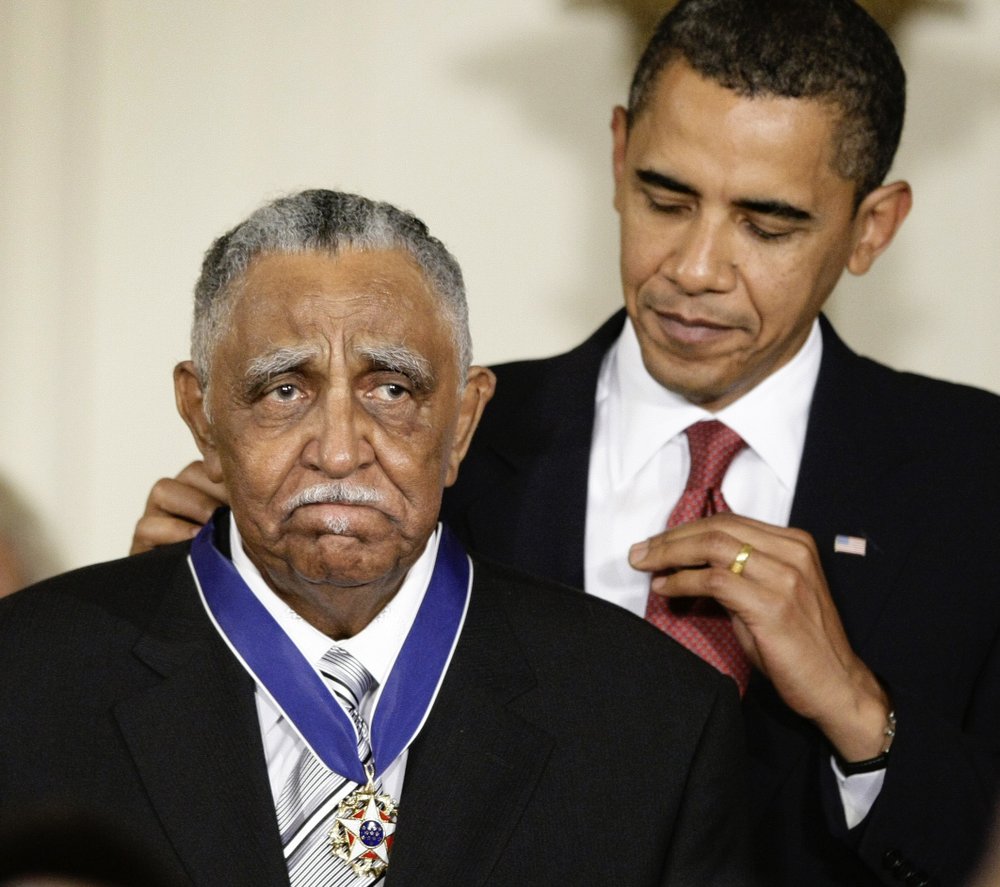 Considered the dean of civil rights veterans, he lived to celebrate a November 2008 milestone that few of his movement colleagues thought they would ever witness — the election of an African-American president.

At an emotional victory celebration for President-elect Barack Obama in Atlanta, Lowery said, “America tonight is in the process of being born again.”

An early and enthusiastic supporter of Obama over then-Democratic opponent Hillary Clinton, Lowery also gave the benediction at Obama’s inauguration.

“We thank you for the empowering of thy servant, our 44th president, to inspire our nation to believe that, yes, we can work together to achieve a more perfect union,” he said. 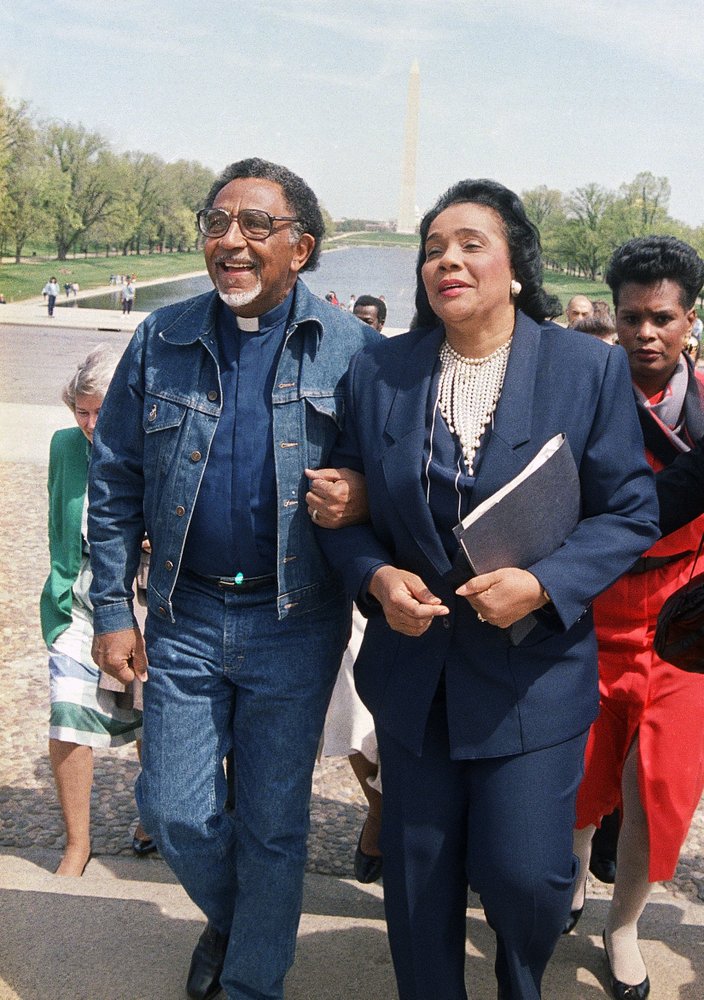 In another high-profile moment, Lowery drew a standing ovation at the 2006 funeral of King’s widow, Coretta Scott King, when he criticized the war in Iraq, saying, “For war, billions more, but no more for the poor.” The comment also drew head shakes from then-President George Bush and his father, former president George H.W. Bush, who were seated behind the pulpit.

Lowery’s involvement in civil rights grew naturally out of his Christian faith. He often preached that racial discrimination in housing, employment and health care was at odds with such fundamental Christian values as human worth and the brotherhood of man.

Lowery remained active in fighting issues such as war, poverty and racism long after retirement, and survived prostate cancer and throat surgery after he beat Jim Crow.

“We have lost a stalwart of the Civil Rights Movement, and I have lost a friend and mentor,” House Majority Whip, U.S. Rep. James E. Clyburn, in a statement Saturday. “His wit and candor inspired my generation to use civil disobedience to move the needle on ‘liberty and justice for all.’ It was his life’s work and his was a life well lived.”

Former President Bill Clinton remembered walking with Lowery across the Edmund Pettus Bridge in Selma, Alabama, on the 35th anniversary of Bloody Sunday. “Our country has lost a brave, visionary leader in the struggle for justice and a champion of its promise, still unrealized, of equality for all Americans. Throughout his long good life, Joe Lowery’s commitment to speaking truth to power never wavered, even in the hottest fires.”

His wife, Evelyn Gibson Lowery, who worked alongside her husband of nearly 70 years and served as head of SCLC/WOMEN, died in 2013.

“I’ll miss you, Uncle Joe. You finally made it up to see Aunt Evelyn again,” King’s daughter, Bernice King, said in a tweet Friday night.

Lowery was pastor of the Warren Street Methodist Church in Mobile, Alabama, in the 1950s when he met King, who then lived in Montgomery, Alabama. Lowery’s meetings with King, the Rev. Ralph David Abernathy and other civil rights activists led to the SCLC’s formation in 1957. The group became a leading force in the civil rights struggle of the 1960s.

Lowery became SCLC president in 1977 following the resignation of Abernathy, who had taken the job after King was assassinated in 1968. He took over an SCLC that was deeply in debt and losing members rapidly. Lowery helped the organization survive and guided it on a new course that embraced more mainstream social and economic policies. 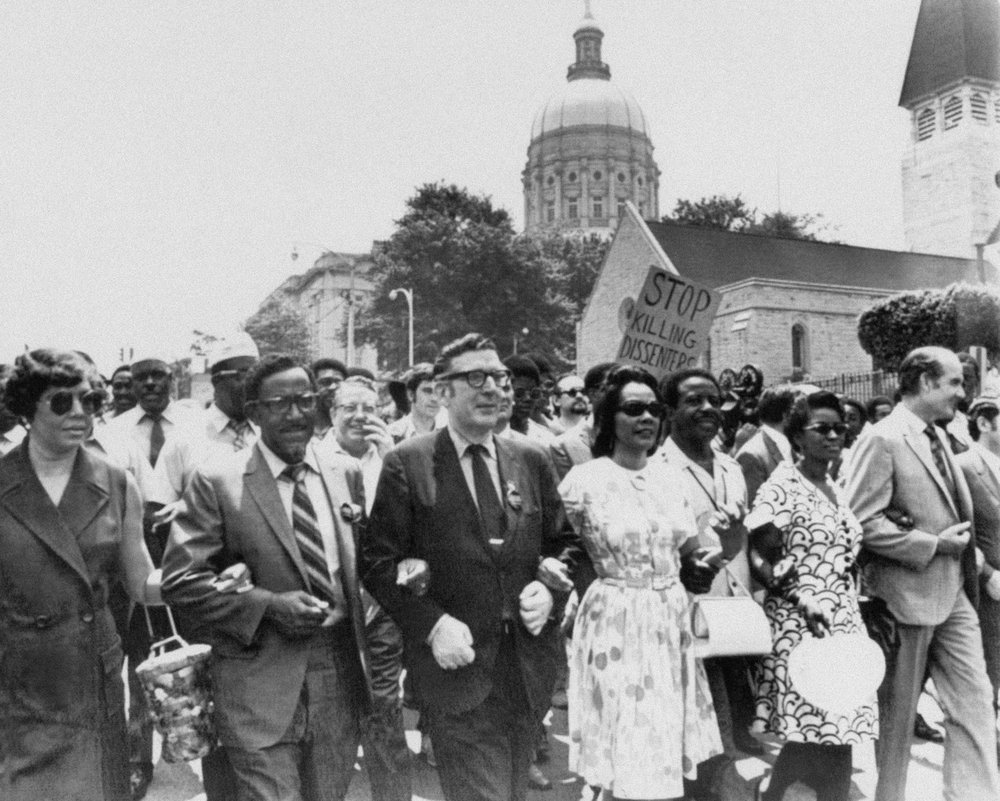 United Auto Workers Union President Leonard Woodcock locks arms with Coretta Scott King and the Lowery as they lead several thousand marchers past the state Capitol in Atlanta in a May 1970 protest march against war, violence and racial repression (AP Photo, File)

Coretta Scott King once said Lowery “has led more marches and been in the trenches more than anyone since Martin.”

He was arrested in 1983 in North Carolina for protesting the dumping of toxic wastes in a predominantly black county and in 1984 in Washington while demonstrating against apartheid.

He recalled a 1979 confrontation in Decatur, Alabama, when he and others were protesting the case of a mentally disabled black man charged with rape. He recalled that bullets whizzed inches above their heads and a group of Klan members confronted them.

“I could hear them go ‘whoosh,’” Lowery said. “I’ll never forget that. I almost died 24 miles from where I was born.”

In the mid-1980s, he led a boycott that persuaded the Winn-Dixie grocery chain to stop selling South African canned fruit and frozen fish when that nation was in the grip of apartheid.

He also continued to urge blacks to exercise their hard-won rights by registering to vote.

“Black people need to understand that the right to vote was not a gift of our political system but came as a result of blood, sweat and tears,” he said in 1985. 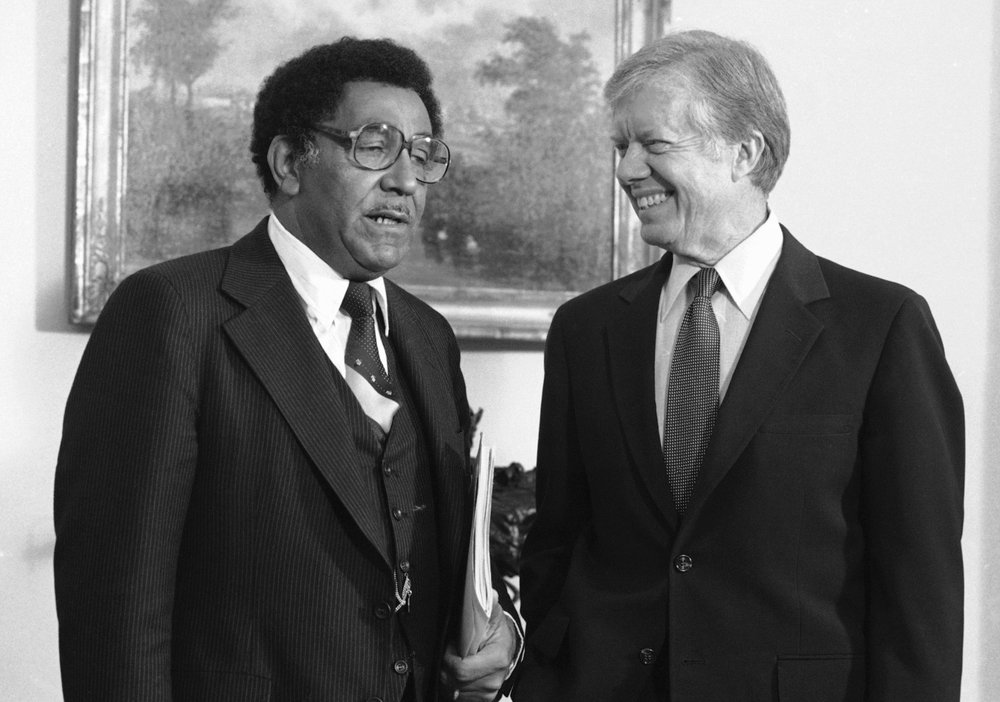 Like King, Lowery juggled his civil rights work with ministry. He pastored United Methodist churches in Atlanta for decades and continued preaching long after retiring.

Born in Huntsville, Alabama, in 1921, Joseph Echols Lowery grew up in a Methodist church where his great-grandfather, the Rev. Howard Echols, was the first black pastor. Lowery’s father, a grocery store owner, often protested racism in the community.

After college, Lowery edited a newspaper and taught school in Birmingham, but the idea of becoming a minister “just kept gnawing and gnawing at me,” he said. After marrying Evelyn Gibson, a Methodist preacher’s daughter, he began his first pastorate in Birmingham in 1948.

In a 1998 interview, Lowery said he was optimistic that true racial equality would one day be achieved.

“I believe in the final triumph of righteousness,” he said. “The Bible says weeping may endure for a night, but joy cometh in the morning.”

While plans are underway for a private family service in alignment with public health guidelines on social distancing amid the pandemic, the family said late Saturday, a public memorial will be held in late summer or early fall.

Errin Haines, a former staffer of The Associated Press, was the principal writer of this obituary.