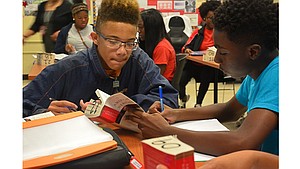 Memphis high school students who are failing state tests are improving in most subjects — one of a few silver linings amid mostly gloomy results for Tennessee’s largest school district.

State scores released on Wednesday show little movement in getting more Shelby County students to pass the standardized test. The percentage of those learning on grade level in math and English remained steady at almost 10 and 21 percent respectively, well below the state averages of 22 and 34 percent, which are also low.

But even as Superintendent Dorsey Hopson called the results “sobering,” he celebrated some bright spots.

The percentage of students in the lowest category of scores decreased by 10 percent in English and 1 percent in math. And on end-of-year science tests — which are measuring standards that are on their way out — 5 percent fewer students scored extremely low.

“I think it’s remarkable work that we can all be proud of and celebrate,” Hopson told board members Tuesday night before the scores were released.

The scores mark the second year of results under Tennessee’s harder TNReady test. The assessment, aligned to Common Core academic standards, is designed to give students and parents a more accurate view of performance, in keeping with the results of national tests such as the ACT college entrance exam and the National Assessment of Educational Progress, known as the Nation’s Report Card.

Last year, the Memphis district, which serves a majority of poor and black students, logged some of the state’s lowest scores amid a statewide drop.

This year, Shelby County leaders were hoping their scores would follow modest statewide gains showing more high schoolers performing at or above grade level. That didn’t happen, but they found consolation in other achievements.

Four out of the district’s 36 high schools exceeded the state’s passing averages in both English and math: Middle College, White Station, Germantown and Hollis F. Price. Each of those schools has a magnet program for high-performing students.

One notable downturn: The district’s charter school sector did not fare well and even “went backwards” in some areas, said Brad Leon, chief of strategy and performance management for Shelby County Schools.

Chief of Schools Sharon Griffin said Shelby County Schools will spend $5 million for professional development for teachers this year to adapt to the state’s new academic standards and the district’s new curriculums for those subjects.

“Our students can only be as great as our teachers,” she said.