By Breanna Edwards, The Root 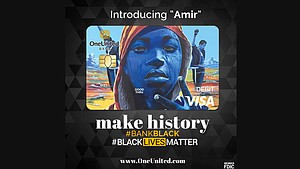 Elected officials, businesses and individuals in general can sometimes find it easy to overlook voices of protest that call for equality and justice. One thing that is seldom overlooked, however, is money, and black America has a lot of spending power to throw around—about $1.2 trillion to be precise. Now, OneUnited Bank, the largest black-owned bank in America, and the Black Lives Matter movement are coming together to help black America organize around its spending weight, and are introducing a special debit card to give the initiative a symbol, just in time for Black History Month.

“Social and economic justice are intertwined, and we have the power within ourselves to take some important, positive steps towards addressing some of our challenges,” Teri Williams, president of OneUnited Bank, tells The Root.

“We spend $1.2 trillion and if we could redirect some of that spending towards supporting some of our organizations and our business, we can grow jobs and we can help movements like Black Lives Matter in giving them the resources that they need in order to be successful,” Williams says.

The bank’s position is striking, especially given that only just recently, Wells Fargo refused to create a customized Black Lives Matter card for a customer. But, you know how it goes; sometimes it has to be for us, by us.

Black Lives Matter at this point is a household name, having existed for more than three years, fighting against the systemic oppression and state-sanctioned violence against black people. OneUnited Bank has been a fierce advocate of the black community, launching just last year the #BankBlackChallenge, encouraging the black community to invest in itself by putting money into black-owned banks, while also promoting several programs to help the community with its financial literacy.

From this partnership, focused on the main goal of black empowerment, the “Amir” debit card will also be launched. Amir is the name given to one of OneUnited’s #BankBlack campaign images, featuring a young black boy. The images of Tommie Smith and John Carlos giving their famous black power salute from the 1968 Olympics grace the background of the image on the card.

“The Amir card is really important on a lot of levels,” Melina Abdullah, an organizer with Black Lives Matter and one of its original members, says.

“We have this face of this beautiful black boy who will evoke for many folks people like Trayvon Martin. There is the reminder of … the possibilities that there are for our future, and then just behind the image of Amir is Tommie Smith and John Carlos … which is really a beautiful representation of black power and the resolve to stand up for black people even when it costs you a little bit,” Abdullah says.

Everyone who receives an “Amir” card will get notices from OneUnited encouraging them and providing them with ways to donate to Black Lives Matter through their card, as they are able, whether monthly, annually or as a one-time donation.

“[We hope that] every time everyone pulls out their card, they think about how they’re spending their money, how purposefully we can spend our money, and also … when I hand [the Amir card] to someone, I’m saying to them that black lives do matter, that black money does matter and that we are an important consumer,” Williams says. “I do think that it is important, not only for us to be reminded of, but for the world to be reminded of, that we spend $1.2 trillion. That’s a lot of money! We need to show the world that we have the power to move it.”

Abdullah adds that the organization has been banking with OneUnited since the movement’s inception, and points out that banking black does make a difference.

Black Lives Matter has also been pushing a #BackingBlackBusiness effort for some time, and this partnership can be seen as a culmination of all of that to ensure that black people support black business “rather than spending our dollars with white corporations that sometimes are even contributing to the state-sanctioned violence of our people,” as Abdullah puts it.