By Michael Harriot, The Root 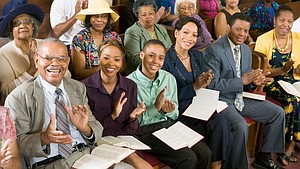 Today, for Black History Month, I’d like to tell you about something that has been long forgotten in the legacy of Africans in America. You may have heard these stories and dismissed them as fabulous folklore or passed-down legends that bloomed into fable over the years, but trust me, this ain’t no Paul Bunyan fairy tale. Everything I’m about to tell you is 100 percent true, with no alternative facts sprinkled in.

You might want to sit down for what I’m about to tell you:

A long time ago, all across this country, there used to be—OK, I know this is going to be hard to believe, but stay with me for a minute. In black communities everywhere, there were preachers, pastors and clergymen who were honest, trustworthy men of God. They were the heads of the most important institution in the entire black universe: the black church. And both the churches and these men were—now, here’s the part that’s going to blow your mind:

They were actually important to the black community!

I heard you gasp. Don’t look at me like that. I know it is hard to believe, but I swear it’s true. I’ve seen it with my own eyes. I even visited a few of them, back when I was a young man. Stop laughing. I’m not even kidding.

I knew you wouldn’t believe me, but I understand. You probably roll through black neighborhoods and see churches on every corner and wonder how there can be so many problems in black America when we have these well-attended, amply funded, faith-based institutions sprinkled throughout every place people of color live. I’m sure you’re wondering how we could have trustworthy men and women leading what amounts to community town hall meetings every Sunday, yet fail to produce any real results?

I ask myself that question all the time.

But you should know, I’m not lying when I tell you they used to be very relevant to our struggle. They weren’t always run by con men and gold diggers. I’m not talking about things my grandmother told me, or regurgitating something I once read in a World Book Encyclopedia. I’ve seen black preachers and clergy go from home to home spending time with the disabled. I remember how they prayed with the sick, consoled grieving families and even—why are you laughing so hard?

OK, I know you’ve seen Creflo Dollar’s poker-faced pleas when he explained how he needed a bigger private jet to do the Lord’s work. I thought it was hilarious, too. Well, to be honest, before that video, I had never actually seen Creflo Dollar, so I thought it was an ingenious sketch satirizing the black church. I asked who this new black actor on Saturday Night Live was, until someone informed me that it was real. (Also, most people aren’t aware that during Jesus’ Sermon on the Mount, he, too, asked the Pharisees to upgrade him to a G5. You just can’t expect the son of God to fly commercial. Not with 12 disciples and Mary Magdalene. Do you know how much those tickets would cost?)

I bet the reason you’re giving me the side eye right now is that you’ve heard Kim Burrell’s golden-voiced carols about the love of Christ, right before she launched into a hateful, homophobic rant. I understand that it’s hard to fathom the con men we now call clergy as pillars of communities once you’ve seen Donnie McClurkin tell people not to protest but to pray. Eddie Long’s extended history of abuse is reminiscent of the Catholic Church’s centuries-long scandal, so I can see why you’re skeptical. You probably watched fake doctor Pastor Darrell Scott sell his soul to sidle up to the devil’s dingleberry we now call “president,” and it all looks so detestable. I get it, I really do.

But there was a day when these men were our shepherds—and not just in the spiritual sense. There once was a time in our history when “reverend” wasn’t just a title. It was an apt adjective. Before they started calling Martin Luther King Jr.’s sermons “civil rights speeches.” Back when black churches were organizing centers, polling places, help for the poor and shelters from the storm. Back when we gathered in the sanctuaries to discuss marching across the Edmund Pettus Bridge. Back when our places of worship were such catalysts for change that white supremacists bombed the Baptist one in Birmingham, Ala., to bits. Back when we huddled in them for the first watch night services.

Even before they were stops on the Underground Railroad, our churches were always beacons of black freedom. Ask Denmark Vesey where he planned his slave rebellion. Ask Dylann Roof where he knew he could find nine angels.

When we were first allowed to read and write, it was these tabernacles that injected literacy into hungry black brains. We learned phonics from the Bible, and our first school desks were pews. After the Civil War, those same congregations established HBCUs to further educate parishioners.

I’m sure this all sounds like a tale about a Sasquatch or the Loch Ness Monster, but we stand on the shoulders of men like Nat Turner, King, Malcolm X and countless others who truly dedicated their lives to God and their people. The black church has been our respite, source of strength and the tie that binds our community since our shackled ankles first set foot on these shores.

The hell if I know.

Maybe it was the slick-mouthed charlatans who dipped their hands in King’s blood, smeared it on themselves and tried to replace him on the throne. It might have been the opportunistic snake oil salesmen who magically teleport themselves to the scene of every black tragedy (but only if there are cameras and spotlights). Maybe it was when they put ATMs in the vestibules. Perhaps it is our fault—black people have a blind spot and weakness for charismatic hustlers, Jesus and sweet potato pie.

To be fair, this isn’t a new phenomenon. There have always been opportunistic vampires hiding in the shadows of black communities waiting for their chance to pounce and drain our blood, money, sweat and anything else of value. We’ve been fighting this same problem since Sweet Daddy Grace, but it seems like it has gotten worse.

That’s because it has.

You shouldn’t stop dreaming. But sometimes you should open your eyes, watch the deacons wearing six-button, pastel Steve Harvey suits passing around offering plates. Think about the power that our places of worship piss away. Think about the millions of black people faithfully tithing their blood and sweat into those collection baskets and imagine the economic power we could have if we recirculated that money back into our communities. Calculate how many kids we could send to college for free if we had 10 percent of the incomes of all the black churchgoers—because someone has it. Imagine the power our communities would have if all the black churches in your town put their money in the same black bank. Think about the political lobbying power those churches throw away on gold-plated candelabras, building funds and perks for the pastor.

If I told you that I once saw Bigfoot walking around in the woods, you’d think I was crazy. If I told you I set a million dollars on fire, you’d say it was a shame.