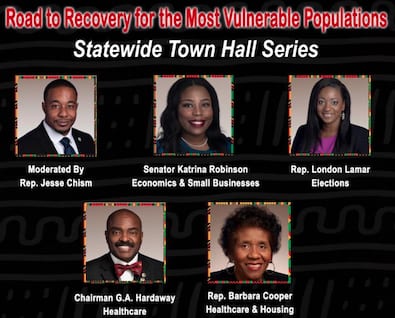 There is a long road ahead to recovery, especially for communities of color, as a result of the COVID-19 pandemic.

During the virtual meeting, the group of lawmakers focused on issues that have disproportionately affected African Americans during the current health crisis.

And, as members settle back into their legislative sessions at the state Capitol this week, they reassured citizens that these issues will be a top focus on their agendas.

Topping that list was healthcare, economic empowerment and the upcoming elections. At the center of it all, though, was ensuring that African Americans “come out better before than before the pandemic hit.”

“We’re in this together,” State Rep. Jesse Chism (D-85) said. “And I believe that we can come out stronger if we do what we have to do.”

Among the list of “do’s” was focusing on overall health during the pandemic.

Rep. G.A. Hardaway (D-93) said it needs to be a primary focus for African Americans, who are more likely to have underlying conditions such as hypertension, diabetes, heart disease, and asthma that can contribute to the mortality rate of COVID-19.

“Many of these were already issues in our communities, but have gotten worse because of the pandemic,” Hardaway said. “That’s why education is important. First educate yourselves and then go out and educate others.”

In Shelby County, that disparity is represented. Of COVID-19 related deaths, 75 percent were African American, according to data released by the Shelby County Health Department in April. Among diagnosed cases recorded so far by race, 71 percent are African-American.

Data showed that of the local COVID-19 deaths, 80 percent also had some kind of pre-existing condition.

The Health Department also reported the highest percentage of the county’s coronavirus cases — not deaths – is among people ages 25 to 34. Hardaway said “young people” should take heed to those numbers.

“Young folks, you’re killing your parents and grandparents,” he cautioned during the meeting. “We have to make sure that we’re taking all of the safety measures –washing your hands, wearing masks, social distancing…”

Hardaway also acknowledged the dilemma that exists for some African Americans, who may not be able to social distance due to a less than ideal housing situation.

“For some of us in our communities, social distancing may be us moving to the other side of the couch,” he said, adding that it’s important to still “do what you can.”

While staying healthy was the primary concern, caucus members said the road to recovery will also include economic empowerment.

She referenced the findings of a recent survey conducted by the Greater Memphis Chamber, that surveyed 600 businesses across the city. The results included responses given between March 19-23and then again between April 22-27.

Sixty-five percent indicated that business was down more than 11 percent compared to this time last year.

“For those who aren’t affected – good for them,” Robinson said. “But for those, especially black-owned businesses that are, it’s going to be difficult to bounce back,”

According to the chamber’s survey, 81 percent of local businesses have already applied for federal assistance, with only half receiving approval or even feedback, so far.

That’s why Robinson said support within the African-American community will be critical on the road to recovery.

“We have to shop local and make sure you’re supporting local businesses,” she said. “I know many people are going through tough times, but if you have to buy, buy local and support those who look like us and will actually put the money back into our community.”

Caucus members said elections will be pivotal. And for that reason, they want to be sure that people are poised to vote despite the concerns of contracting COVID-19.

State Rep. Lamar London (D-91), a strong advocate for universal absentee voting, took the time to push for the measure that will allow anyone in Tennessee who wants to vote via absentee ballot to request the opportunity to do so.

“Elections are one of the fairest ways people of color can have a say about what goes on in our communities,” Lamar said. “And we have a lot of concerns as a black caucus of having people vote in person. The governor (Bill Lee) is asking people to risk their lives and go to the polls and that’s not right.”

“This is not a partisan issue, it’s about people.”

The next election, on Aug. 6, will be for federal and state primaries, and the county General Election.