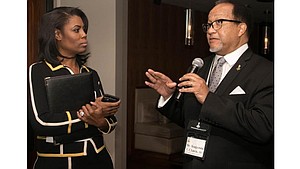 Dr. Benjamin F. Chavis Jr., president and CEO of the 211-member National Newspaper Publishers Association, still fully expects to get the face-to-face exchange with President Donald Trump that surfaced as a possibility shortly before inauguration.

Chavis, the keynote speaker in Memphis last Saturday at the Legends and Leaders Gala celebrating The New Tri-State Defender’s 65th Anniversary, addressed the likelihood of a session with Trump during a telephone interview with the TSD on Wednesday.

“It is in the NNPA’s interest to interview the President of the United States and I still believe that,” said Chavis. The NNPA is an association of African-American-owned newspapers strung across the country.

Omarosa Manigault, Trump’s director of communications for public liaison, abruptly left a breakfast meeting last Thursday (March 23) that the NNPA hosted in Washington, DC during the observance of Black Press Week. Manigault, who had asked to attend the meeting, walked out after an exchange with Hazel Trice Edney of TriceEdneyWire.com.

The two were at odds about earlier coverage of a closed-door meeting. The Jan. 8 story written by Edney quoted civil rights lawyer Barbara Arnwine as saying that Manigault promised the “first interview” with Trump to Chavis during a Jan. 4 Trump transition team meeting with African-American leaders. Manigault apparently was irked because the story said she promised Chavis “the first interview.”

During last week’s meeting, Edney asked Manigault about “the promise that Ben Chavis would get the first interview with the president.” Manigault then disputed the reference to the first and an exchange ensued that degenerated into Manigault leaving the room.

“It (the meeting) started out in a very cordial and positive way,” Chavis said of the meeting. “Chairman Denise Rolark Barnes introduced Manigault to the publishers. Manigault had made a very appropriate statement about the viability of the Black Press in America and she wanted to come by and give greetings to the publishers and looked forward to having an ongoing, meaningful and beneficial relationship between the White House and Black America via the Black Press.”

Things became polarized after the opening statement as she fielded questions.

“It came to a point where it became antagonistic,” Chavis said. “She decided…well, she didn’t make a statement, she left. She didn’t say, ‘I’m leaving.’ She put down the microphone and made an exit.”

Given Manigault’s departure and the negative feedback some in the room expressed about her abrupt exit, Chavis was asked where that left the relationship.

There has been concern openly expressed in various quarters that African-American reporters and African-American Press are not being “respected” by the Trump administration. On Tuesday, April Ryan of the White House press corps had a high-profile exchange with Press Secretary Sean Spicer that many are citing as the latest evidence of such treatment.

Asked about the concern, Chavis said, “I think it is a valid concern. But I think what happened at the NNPA meeting — I don’t want to confuse that or connect that to what happened with the press secretary. I think those are separate matters. Anytime where there is controversy people tend to link all controversies into one pot.

“I think that they are parallel and may have some connection, but my concern, first and foremost, is too make sure that the interests of the NNPA are articulated and protected. And in this case, it is still the interest of the NNPA not to be thwarted by the controversies of the past but to look toward opportunities where, in particular, the federal government is the single largest advertiser in the United States.

“That is what we are trying to correct,” said Chavis, “even in this current climate.”

Asked what else he would want to address with Trump, Chavis said, “whenever the meeting happens there will be a broad range of issues – education, health, employment, economic development, improving the quality of life of Black America. That’s our objective.”

Chavis said he is locked in on the interview, not whether it ever was to be the first.

(This story includes information from TriceEdneyWire.com)