The proposal reflects a slight increase over the previous year’s budget of $708.6 million and includes an $89 million capital budget.

“Even though we now are well underway with the vaccine process, there is still much uncertainty about the disease and the economy. These uncertainties continue to make estimating our revenue three to 15 months from now very difficult,” Strickland said.

Between $160 to $168 million in American Rescue Act funding is expected to flow in this year and next.

Strickland said the city intends to use the first $18 million of the funding to make up a shortfall in the operating budget. Much of the deficit is attributed to sales tax revenue declines in key industries such as hospitality and tourism.

While property values have risen that will not result in an financial bonanza for the city, Strickland said.

“State law requires us to reset the tax rate to a lower figure, so that our overall property tax revenue is the same before and after the assessment. Some property owners will pay more, some less and some the same, but City government will collect the same.”

He nixed the idea of a tax increase during the pandemic, however, seeking parity with the previous year’s totals.

“I will not be proposing a tax increase. Especially because so many of our neighbors have suffered significantly over the last 12 months,” said Strickland.

Budgets have typically grown about $10 million per year under Strickland. With revenues on the decline, cuts are expected.

“For us to be satisfied with the amount of services that you are going to get for a $2.75 or $2.80 tax rate – we are doing a disservice,” complained Councilman Martavious Jones, who said a tax increase should be considered.

“We are going to continue to rob Peter to pay Paul. Are we going to cut our way to prosperity?”

During a media conference at Local 1733’s headquarters at Fourth and Beale, there was a push for five percent, across-the-board raises for all workers, excluding the highest paid, who would receive a 2.5 percent bump.

“The passage of the American Rescue Plan is providing city officials with more than enough resources to alleviate budget shortfalls due to the coronavirus pandemic,” the groups’ press release.

“Throughout that time, these dedicated employees put their lives on the line to serve their communities, even when COVID-19 cases were soaring.”

Strickland’s proposal calls for a 2 percent raise, or $7 million, for firefighters and police. It also sets aside $2 million for the group violence intervention program. 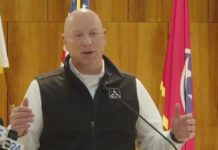 Council gets an after-action report on bomb cyclone winter storm Spreading the word about Opportunity R3