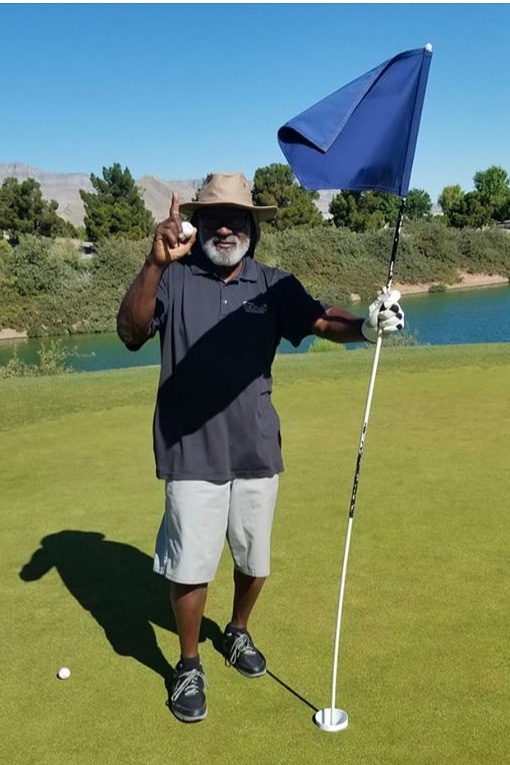 May 25, 2020 — It was Sunday, May 24, and a balmy 87 degrees on the grounds of the Durango Hills Golf Club in Las Vegas, Nevada.  The city had an excessive heat warning in effect, however, this did not deter Granville Brown, as he aimed his shot at hole #10.  The strike was perfect, hitting the ‘play it safe’ modified golf cup and bouncing about 2-feet away, to the left.  “It’s a Covid-19 hole-in-one,” chuckled Granville on a telephone interview with this publication.  He achieved it on a Par 3 at 157 yards. The retired former college professor used a ProV1 ball and a 6 iron Callaway Apex to get the job done.

Durango Hills is a Lee Schmidt/Brian Curley designed public 18-hole, par 58 golf course.  The course offers undulating greens and scenic views of the Red Rock Mountains, measures 3,777 yards from the back tees, and consists of one par 4 on the front nine and three par 4’s on the back nine.   During Covid-19, with social distancing in mind, the course has implemented safe-play rules which include a raised cup to prevent the ball from entering the hole.  During play, if a golfer’s ball hits the raised cup, rebounds, and comes to rest within a few feet of the target, it is considered a made shot. “I was excited and so were my playing partners, David Washington and Byron Holmes,” said Granville.  “It was a good day.”

Dr. Granville Brown and his wife, Ellen, relocated to Las Vegas several years ago from Grand Rapids, Mich.  They both enjoy the game and spend much of their time involved in the sport and in just a few short weeks, Granville will be installed for his third term as President of the Western States Golf Association.

IN CASE YOU MISSED IT: