By David A. Love, theGrio 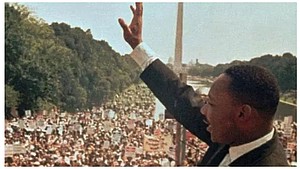 Another Martin Luther King Day is upon us. And this year, the slain civil rights leader’s birthday comes at a time when America finds itself at a crossroads, and in a very frightening way.

We need King’s spirit and message more than ever, and a new generation of leadership to fight an epic twenty-first century battle in the movement for civil rights.

And yet, the King legacy over the years has been watered down — diluted, neutralized and compromised — precisely at a this critical time in America.

What did Dr. King stand for?

The revisionists focus on King having a dream, as if he were some passive daydreamer who was abundant on ideas but who fell short on action. Meanwhile, the national holiday bearing his name has evolved into a Day of Service as “a way to transform Dr. King’s life and teachings into community service that helps empower and strengthen local communities.” The concept of serving society is a noble one, provided that it is a first step and not the be all and end all. After all, there is a risk that people will lull themselves into thinking that a single day of service will get the job done and absolve them of further responsibility.

Service, however, is just the beginning of the story. King was revolutionary and radical, and his message to the people indicated such. “We as a nation must undergo a radical revolution of values,” he said. “We must rapidly begin … the shift from a thing-oriented society to a person-oriented society.”

Dr. King believed in disobeying unjust laws and that we, as American citizens, have a moral obligation to do so. He expressed his disappointment with the white moderate who tells black people to wait for freedom, that this is not a convenient time, and “who paternalistically believes he can set the timetable for another man’s freedom.”

In addition, he called America “the greatest purveyor of violence in the world today,” and railed against the triple evils of capitalism, militarism and racism. King spoke out against the Vietnam War because “the hottest places in hell are reserved for those who in a period of moral crisis maintain their neutrality. There comes a time when silence becomes betrayal,” he said. And he tied the injustice of war young black men were fighting abroad to the injustices facing those black men in Chicago, Atlanta, Watts or Harlem.

This is the un-sanitized King that they don’t talk about. That is not the Martin Luther King we know. This is not the King that white conservative politicians will invoke when they desecrate his name and twist his words in order to support their perverse dismantling of civil rights in the name of white nationalism. The real King did not play it safe, nor did he promote the status quo.

The government does not consider you a threat and seek your assassination if you just want to hold hands and sing. And dream. But when you seek to change the fundamentals of society as King did, well, that’s another thing altogether.

Today, America is plagued with an onset of backsliding on so many levels. The departure of the nation’s first black president has led to the rise of Donald Trump and his minions, the angry white mob that views its progress as dependent on the suppression of black power and the aspirations of people of color.

With no shame, a reactionary white power structure on the national and state levels is taking away civil rights, voting rights and the social safety net, and planning for heightened police violence against the black community. Such times require a new generation of leaders to engage in mass protest and civil disobedience. But there are many ways to do it, and new techniques, tactics and strategies are necessary to take on this century’s incarnation of Jim Crow.

Boycotts and Buy Black campaigns are necessary to bring the economic power of the black community to bear. The Black Lives Matter movement against police violence is one example of what is needed, as is the student activity on college campuses to combat institutional racism and the hostile environment towards African-American students.

Rev. Barber is on the right track with his Moral Mondays movement to stop the assault on our rights in North Carolina, as is Cornell Brooks and the recent NAACP sit-in to protest the nomination of Sen. Jeff Sessions as U.S. Attorney General. And we must not forget the Women’s March on Washington set for Jan. 21, in which women of all backgrounds will respond to a most divisive election and proclaim that women’s rights are human rights.

Moreover, King understood how the various forms of oppression are interrelated. And this is a point in time where the assaults on citizenry are so broad and the threats so sweeping — from reproductive rights, LGBT rights and Muslim registries to mass deportations and legalized racial profiling — that his philosophy is made to order. The man resonates more than ever, perhaps even more than when he left this world and some even in the black community did not support him.

We are not free, and we are not safe. And we did not overcome. Things are as bad as ever, and more severe than we realize. We must make Dr. King’s words real and keep it real, and that means fighting for change. Real change.