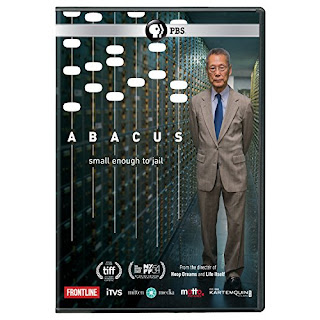 Asian-Americans are often referred to as the “model minority” because of their success in the U.S. despite the existence of discrimination which has crippled other ethnic groups. However, the label has also led many a racist to misread Asian modesty as an invitation to treat them like doormats.

Consider the serious rudeness done to Dr. David Dao, the Vietnamese-American physician who was beaten to a pulp by the police and dragged off an airplane for refusing to surrender a seat that he’d paid for to a United Airlines employee flying for free. Lost in the sauce was the fact he and his family were very likely selected because of the color of their skin. After all, the airline employee probably specifically targeted the Dao family never expecting members of the model minority to put up much of a fuss about getting bumped.
Abacus: Small Enough to Jail is a jaw-dropping documentary which chronicles an equally-outrageous example of bigotry, this time against the Sungs, a clan of Chinese-American immigrants. Inspired by the classic film “It’s a Wonderful Life,” family Patriarch Thomas Sung founded Abacus Federal Savings Bank in 1984 in the heart of New York City’s Chinatown.
He was motivated to help his community after repeatedly witnessing how other lending institutions were willing take Chinese people’s deposits, but were very hesitant to let them borrow any money. Abacus flourished over the years, and his daughters, Jill and Heather, joined the family business as executives after becoming lawyers.
The world came crashing down around them all when the bank and 19 of its employees were charged with conspiracy, larceny and fraud in the wake of of the 2008 subprime mortgage crisis. What’s stunning is that Abacus was the only financial institution the government ever held responsible criminally for the collapse of the mortgage market. Furthermore, the case was based entirely on evidence which Abacus itself had turned over to federal regulators upon unearthing felonious behavior on the part of a loan officer it fired on the spot.
Was the ensuing prosecution malicious or warranted? Judge for yourself. But don’t be surprised if this chilling expose leaves you convinced the Sungs were innocent victims of a thoroughly corrupt legal system doling out “justice” in color-coded fashion, even when it comes to white-collar crime.

To see a trailer for Abacus: Small Enough to Jail, visit:
https://www.youtube.com/watch?v=6lX87ASYhQk

To order a copy of Abacus: Small Enough to Jail: