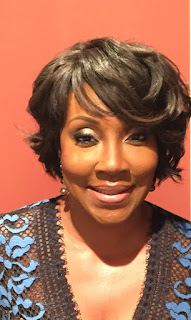 The “A Question of Faith” Interview
with Kam Williams
White’s Insights!

Angela White is a film producer, talent and business affairs executive and member of the Producer’s Guild of America who specializes in creating compelling, commercial material with a distinct perspective. She is the founder of Silver Lining Entertainment, a family-owned Multimedia Entertainment Company based in Los Angeles.
Angela earned a Bachelor of Arts degree from the University of Delaware prior to receiving a Master of Arts degree in Political Science from Rutgers University. While still at Rutgers, she produced the critically-acclaimed “Hypocritical War on Drugs.”

That riveting, PBS documentary conducted an uncensored investigation of the so-called “escalating war on drugs.” Even though the experience sparked Angela’s interest in the entertainment industry, she nevertheless decided to become a lawyer before launching her career.

Whether renting a movie or surfing cable TV or Netflix, one would likely have seen some of her recent films. Her impressive resume includes Busted which was released by Lionsgate in March and stars Rockmond Dunbar; the dark thriller, The Sin Seer, which was released nationwide last year and stars Isaiah Washington and Salli Richardson; the inspirational, made-for-TV film, Who Can I Run To? starring gospel artists Tasha Page Lockhart, Marvin Sapp and Jessica Reedy; the romantic comedy, and My Favorite Five, which stars Rochelle Aytes, Brian White and Jay Ellis.