By Kelvin Cowans, Special to The New Tri-State Defender 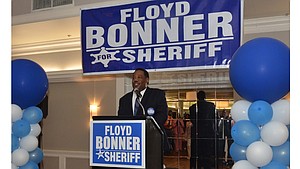 Sheriff Bill Oldham was on hand at The Racquet Club of Memphis at 5111 Sanderlin as Bonner officially kicked off his campaign for the Democratic Party nomination Tuesday evening before a crowd of 200-plus.

“I am humbled by all of you people I see that came out to support me today,” said Bonner, who called Oldham a mentor over the last few years

“He’s taught me a lot about people, leadership and about how to run this day-to day-operation at the Sheriff’s office.”

Bonner and his wife, Audrey, have been married 35 years and are new grandparents to five-month-old twins. Succeeding in a job such as sheriff requires family support and backing on multiple levels, he said, noting the backing of clergy in the room.

“Somebody asked me why do I want to run for Sherriff, and I’m sure many of you are saying it’s because I’m crazy, ha. But truth is that my dad, who is sitting in the corner over there, has been instrumental in the things that I have done in my life. He is a retired Memphis Police (Department) and Shelby County Sheriff officer and he sat the gold standard in our family on how to be a man and I thank him for that.”

Bonner said it his “commitment to this community that makes me want to be your next sheriff. I am compassionate about it and I love getting up coming to work every day. There is no other place that I have ever thought about working.”

Bonner plans to run experience and his capabilities on the job and in the classroom.

“I have 37 years of experience in the Sheriff’s Office and I know they can be of great use to the community. There are a lot of moving parts in the Sherriff’s Office such as managing the jail and our juvenile offenders and the great programs we have in place for them. There is no one in this race with more experience, supervisory experience or the running of the day-to-day operations of what we are doing here right now.”

Oldham, said Bonner, has laid the ground work and “we are going to continue it on. I need your prayers, I need your support and I need your vote and we will win this race.”

Dale Lane, director of the Shelby County Office of Preparedness, launched his run for the Republican Party nomination in February. He once commanded the Sheriff’s office S.W.A.T. Team.

(Kelvin Cowans can be reached at [email protected])