After 294 days in Russian custody, including the past several weeks in a dreaded and dangerous penal colony, WNBA star Brittney Griner is free.

President Joe Biden and Vice President Kamala Harris met with Griner’s wife at the White House, where they spoke with the basketball player on the telephone.

“She’s safe. She’s on a plane. She is on her way home,” Biden declared.

Whelan has been imprisoned in Russia for nearly four years, and, recently, his family said they hadn’t heard from him.

They were told he was transferred to a hospital, but the family doubted that explanation.

The deal to release Griner was consummated a week ago in the United Arab Emirates. 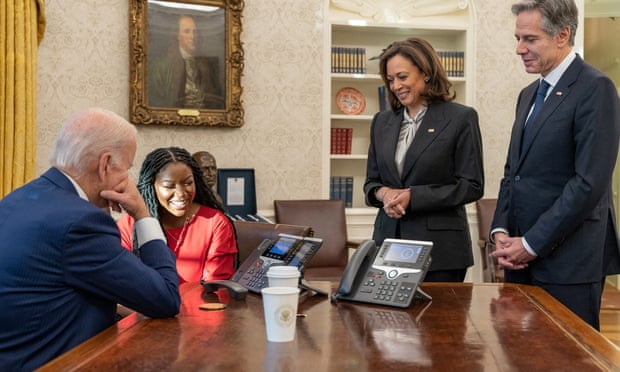 Joe Biden and Cherelle Griner speak on the phone with Brittney Griner after her release by Russia, as Vice-President Kamala Harris and the secretary of state, Antony Blinken, look on. (Photograph: White House/Reuters)

“After months of being unjustly detained and held under intolerable circumstances, she’s coming home,” Biden asserted.

The president said his administration “never stopped pushing for her release.”

“It took painstaking and intense negotiations for her release,” Biden stated.

He thanked the UAE for helping to facilitate Griner’s release and noted that’s where her plane landed after finally leaving Russia.

Biden noted that the past few months had been “hell” for Griner and her family.

He said she’s in good spirits and relieved.

“She lost months of her life,” Biden stated.

He said she deserves space, privacy, and time to heal in a not-so-subtle appeal to media members.

Biden added that Griner wrote him in July, not asking for special treatment.

“She said, please don’t forget about me and the other American detainees,” Biden said.

“We have not forgotten about Brittney and Paul Whelan.”

He said he wished to bring Whelan and any other wrongly detained American home.

“We have not yet secured Paul’s release. But we have not given up, and we will never give up,” Biden insisted.

“We’ll keep negotiating for Paul’s release in good faith. I urge Russia to do the same. My administration has brought home dozens of wrongly detained Americans and many who were detained before I took office,” Biden continued.

“Reunited Americans with their loved ones remain a priority. We will continue to work to bring home every American who endures such injustice.”

Cherelle Griner called Brittney’s plight one of the darkest moments of her life.

“Over the last nine months, you all have been privy to one of the darkest moments of my life. I’m overwhelmed with emotion but sincere gratitude to President Biden and his administration,” Cherelle Griner stated.

“Today, my family is whole. As you are aware, there are so many families who are not whole. BG and I will remain committed to the work of getting every American home, including Paul, who remains in our hearts.”

As expected, civil rights activists, many in the sports world, and politicians applauded Griner’s release.

“This is long overdue,” Rev. Jesse Jackson declared. “This is a cause for global celebration and could be a step toward peace. Releasing prisoners and prisoner swaps as opposed to more bombing and killing is good news,” Jackson stated.

Texas Democratic Congressman Al Green said he was delighted at the timing of Griner’s release.

“There’s no place like home for the holidays,” Green tweeted.

Tennis legend Billie Jean King tweeted, “Thank you to President Biden and all those who worked so hard to secure her freedom.”

“Brittney Griner is coming home. This is a huge relief for Brittney and her family after months of uncertainty,” Allred said.

“I commend President Biden, Secretary [Antony] Blinken, the State Department, and all those who made this happen. We remain committed to getting every American detained abroad back home.”

The NNPA is the trade association of more than 230 African-American-owned newspapers and media companies in the United States.

“Thanks to the effective leadership of President Joe Biden, our beloved sister is now free,” Chavis declared.