‘NOTHING IS NORMAL’: Small-town hospital soldiers ahead against pandemic 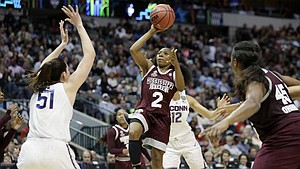 UConn is out of the NCAA tournament and its 111-game winning streak is over after Morgan William hit a buzzer-beater at the end of overtime to send Mississippi State to the women’s championship game by the score of 66-64. UConn was able to tie the game up and set up William’s winner with a highly questionable flagrant foul call on Dominique Dillingham with 27 seconds remaining; UConn didn’t score on the possession, though, giving the Bulldogs the chance to win.
Read more 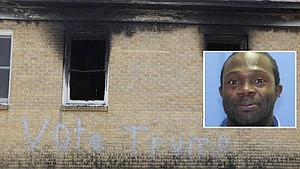 JACKSON, Miss. (AP) – A Mississippi man with a prior criminal record was arrested Wednesday in the burning of an African-American church that was spray- painted with the words “Vote Trump,” and the church’s bishop said the man is a member of the congregation. The state fire marshal said investigators do not believe the fire was politically motivated, but there a signs it may have been done to appear that way. Andrew McClinton, 45, of Leland, Miss. was scheduled to make an initial court appearance Thursday in Greenville – the city where Hopewell Missionary Baptist Church was burned and vandalized Nov. 1, a week before the presidential election. McClinton is charged with first-degree arson of a place of worship, said Warren Strain, spokesman for the Mississippi Department of Public Safety. Hopewell Bishop Clarence Green said McClinton, who is African-American, is a member of the church. Green said he didn’t know about the arrest until he was called by The Associated Press. “This is the first I have heard of it,” said Green, who said he was attending to other church duties and didn't have time for a longer interview. It was not immediately clear whether McClinton is represented by an attorney. The investigation is continuing, and officials have not revealed a possible motive. “We do not believe it was politically motivated. There may have been some efforts to make it appear politically motivated,” Mississippi Insurance Commissioner Mike Chaney, who is also the fire marshal, told AP. Mississippi Department of Corrections records show McClinton was sentenced in 1991 to three years’ probation for a grand larceny conviction in Washington County, where Greenville is the county seat. His probation was revoked in 1992 for receiving stolen property in Greenville, said Department of Corrections spokeswoman Grace Simmons Fisher. In 1997, McClinton was sentenced to seven years for attempted robbery in Lee County. And, in 2004, he was convicted of armed robbery in Lee County. He served eight years in prison and was released in January 2012. His time served included days he was jailed before trial. McClinton’s supervision by the department ended in February, the spokeswoman said. Greenville is a Mississippi River port city of about 32,100 people, and about 78 percent of its residents are African-American. While it’s not unusual for people of different racial backgrounds to work and eat lunch together, local residents say the congregations at most churches remain clearly identifiable by race. Greenville Mayor Errick D. Simmons on Wednesday called the church burning “a direct assault on the Hopewell congregation’s right to freely worship.” “There is no place for this heinous and divisive behavior in our city,” Simmons said. “We will not rest until the culprit is prosecuted to the fullest extent of the law. We take pride in our work to have a unified city and we look forward in continuing that work.” Hopewell was founded in 1905 in the heart of an African-American neighborhood, and the congregation now has about 200 members. While some walls of the beige brick church survived the fire, the empty windows are boarded up and church leaders have said the structure will likely be razed. Rebuilding could take months. After the fire, Hopewell congregants began worshipping in a chapel at predominantly white First Baptist Church of Greenville. Bishop Green said last month the generosity of First Baptist demonstrates that “unlimited love” transcends social barriers. James Nichols, senior pastor at First Baptist, said the Hopewell members are welcome to stay as long as they need a home. Greenville is in Washington County, a traditional Democratic stronghold in a solidly Republican state. In the Nov. 8 presidential election, Republican Donald Trump easily carried Mississippi, but Democrat Hillary Clinton received more than twice the vote of Trump in Washington County — 11,380 for Clinton to 5,244 for Trump.
Read more
1...567Page 7 of 7