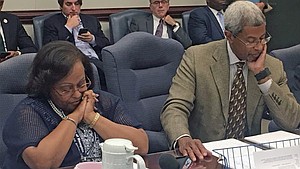 The Memphis City Council on Tuesday embarked on a trail that could lead to the removal of the controversial Nathan Bedford Forrest and Jefferson Davis monuments from two city parks without permission from the Tennessee Historical Commission.

With 12 of 13 members present and voting yes, the council approved the first of three readings of a proposed ordinance – drafted by Memphis City Attorney Allan Wade – that would label the statues as public nuisances.

During Tuesday’s meeting, Wade said the city could argue the statues prevent African-Americans from reasonably having access to the parks – Health Sciences Park and Fourth Bluff Park – where the statues stand.

If approved on final reading Oct. 3, the ordinance would come into play if the Tennessee Historical Commission votes against granting the city a waiver to move the statues when the commission meets on October 13.

“If they don’t (approve the waiver), this ordinance says, ‘Unleash the dogs,’’” Wade said.

State law requires the permission of the THC before such monuments can be moved at all. There are concerns the city will not receive a waiver, particularly since several of the commission’s members also are members of the Sons of Confederate Veterans.

“We are against the removal of any statues,” Lee Millar with the Sons of Confederate Veterans said, citing the importance of the city following “all legal proceedings and they do nothing illegal.”

Gov. Bill Haslam, a Republican, is a member of the THC. He has said the statues need to come down and also included a bust of Forrest that sits inside the Capitol Building in Nashville. State lawmakers, however, have balked at removing the bust.

“The bust belongs in the State Museum,” District 91 state Rep. Raumesh Akbari (D-Memphis) said on behalf of the Tennessee Black Caucus. “We are here to learn from history, not be reminded of its influence of the continuation of hatred, racism and bigotry.”

Statues have been a hot-button issue all summer.

On August 19, hundreds gathered at the statue of Nathan Bedford Forrest in Health Sciences Park in Midtown one week after the proposed removal of a statue erupted in deadly violence in Charlottesville, Va. In Memphis, protesters attempted to put a tarp over the Forrest statue, leading to fights with police officers stationed at the protest. Seven were arrested.

“The statues (Forrest and Davis) can be removed immediately,” activist Tami Sawyer said. “I understand there is a law, and there are legal considerations, but at a minimum, they could be covered today and police presence could be removed.”

Meanwhile, the Memphis Police Department has spent more than $16,000 in costs associated with assuring that nothing happens to the statues.

“I’d like to get back to focusing on the living and not the dead,” Councilman Worth Morgan (District 5) said.

Sawyer circulated a petition signed by 4,500 Memphis asking for the statues to be taken down. Her advocacy has moved some to label her a racist on her Facebook page. And there have been death threats.

Even if the council approves the ordinance on final reading, it would fall to Mayor Jim Strickland to decide whether the city would move without THC permission to remove the statues.

During the council’s Aug. 23 executive session, Wade said, “It’s probably easier to have someone executed by lethal injection than to get a waiver from the Tennessee Historical Commission.”

Wade was tasked with creating a resolution that would consider the options of removing the Confederate statues.

At the time, the four options at hand were 1) the destruction of the monuments 2) the sale of the monuments, 3) a waiver from the Tennessee Historical Commission, and 4) temporary boarding up of statues while city leaders hash the Confederate statue controversy out.