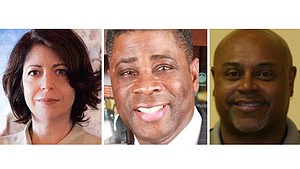 The Executive Committee of the Tennessee Democratic Party will convene a special forum tonight (Jan 24) in Jackson leading up to the election of a new chairman for the state Democratic Party.

The election is set for Saturday.

Incumbent Chairman Mary Mancini has drawn a re-election challenge from Jamie Isabel, a former Nashville city councilman, and John Pointer, a former director of the Office of Small and Minority Business under former Gov. Don Sundquist.

No African American has ever chaired the state party.

The New Tri-State Defender reached Mancini at the party’s headquarters in Nashville.

“I have long range plans to continue the good work we did over the last two election cycles,” she said. “It’s been my great pleasure to travel around the state and motivate Democrats and build the party from the ground up and stand up for Democratic Party values. It would be my great pleasure to do that for another two years.”

Asked about the status of the Shelby County Democratic Party, Mancini said, “We are in the process of jumpstarting the reorganization of the Shelby County Democratic Party now. The process or reorganization always takes a long time if you want to do it right. It happens every two years for every county party. It takes as long as it takes for every county party.”

Mancini said there are many “great Democrats” that live in Shelby County and who want to work to further the party’s goals.

“We can look forward to working on that together all across the county, at all levels of government,” she said.

Isabel called the loss of the Shelby County Democratic Party a debacle.

“For the state chair, to some degree, to close the party and not re-establish the democratic base is an insult,” he said. “That is our largest base and to not have a presence there speaks volume about her leadership. It’s embarrassing, it’s insulting. It needs to be changed.”

Noting that the state Democratic Party has been losing for the last 10 years, Isabel said that tells him that the party has been unsuccessful at fundraising.

“I will expand the voters list and bring in social outreach to put out a strong message that we are about job creation, manufacturing jobs, better education and safe streets,” Isabel said. “Cultures are different, but issues are the same east Tennessee to west Tennessee. These are bread and butter issues that we deal with on a daily basis.”

The TSD had not been able to reach Pointer by deadline time. In interviews, Pointer has said he wants to bring “a business-like approach” to leading the state Democratic Party. His three-pronged platform reportedly is fundraising, generating morale and receiving millennials.

While saying that he did not yet have a favorite candidate, Hardaway said the party’s recent history is pretty eye opening.

“I don’t think what they did was necessary,” he said of the closing of the Shelby County Democratic Party organization. “You don’t destroy something, you fix it. We have enough rules and hopefully smart enough people in the party to fix situations, not just destroy the party itself. And in the period of time since then there has been no attempt at reorganizing, and I think that is unforgivable.”

Adding context, Hardaway lamented the absence of “a working organization in the largest county, with the largest black population in the state” during a presidential election with the possibility of “dire consequences.”

Not having an “official conduit from the local to the national to give us the ability to put resources into place that would give us resources even after the election, win or lose…that is unforgivable,” he said.

“They took us (African-American voters) for granted. It was absolutely disrespectful to black voters and if no one pays the price for it they will do it again.”