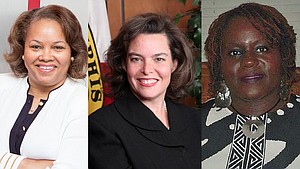 NASHVILLE – Emerge Tennessee, an affiliate of Emerge America, this week

announced its first Board of Directors with 15 members from across the state.

Among board members are Memphis NAACP President Deidre Malone and Olliette

Murray-Drobot, executive director of The Family Center, as well as Maura Black Sullivan,

Executive Director, and the organization plans its first training program to open in March.

“We believe that if families, women and children are to succeed in Tennessee, then we

must start by electing Democratic women to focus on the critical policies like education,

founding member and board member. “Our mission is to recruit, train and empower Democratic

Malone, president and CEO of The Carter Malone Group, LLC, Memphis, is the vice

Murray-Drobot has 20 years of experience in not-for- profit management. The Family

victims. A member of the Memphis/Shelby Crime Commission Board of Directors, she is also a

board member of the Memphis/Shelby County Domestic Violence and Sexual Assault Council.

Sullivan, formerly of Memphis, now is chief operating officer of the City of

Chattanooga. She was also deputy division director in the Division of Planning and Development

in Memphis and Shelby County, and assistant superintendent, Planning and Student Services for

Shelby County Schools. Earlier in her career, she Maura launched her own public affairs and

Emerge Tennessee is an affiliate of Emerge America, which currently working in 17