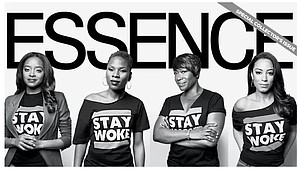 Essence’s May 2017 issue includes its first-ever “Woke 100” list. The cover will spotlight 12 activist women in particular, with the full 100 list inside.

In addition to the Essence story and cover, the Woke 100 will also be presented at the 2017 Essence Festival, which will have the theme of “Woke Wonderland,” and which will take place from June 30 to July 2 in New Orleans. It will also feature the Festival’s Empowerment Experience Stage, which features voices such as Congresswoman Maxine Waters as well as others from the Woke 100 list.

“We are beyond proud to announce our first ever Woke 100 list and to summon a circle of women who are shaping the narrative of today’s social and political climate,” said Essence editor-in-chief Vanessa De Luca. “As we kick off the conversation of modern activism in our May issue, the 2017 Essence Festival’s ‘Woke Wonderland’ theme will act as the intersection of passion and purpose—bridging the gap between this generation’s most prominent voices in leadership and those who’ve laid the groundwork before them.”

Check out the May issue of Essence on sale Friday, April 21.