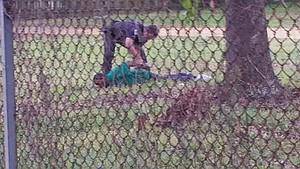 Relatives of Walter Scott differ on how much time a white former officer should spend in federal prison for gunning down the black motorist, with one brother suggesting Michael Slager should go away for life.

But others, like Scott’s mother Judy, said the officer’s admission of guilt was all the punishment she needed to have closure and move on, telling reporters, “That he admitted he did it was enough years for me.”

It’s now solely up to a federal judge to determine how long Slager, 35, will spend in prison after his guilty plea to a federal civil rights violation in the April 2015 shooting death of the 50-year-old Scott.

Slager shot Scott five times in the back as he fled the officer on foot, and cellphone video of the shooting was viewed millions of times around the world. The officer, fired after the video became public, testified at his murder trial that he feared for his life and that Scott was trying to grab his stun gun. Last year’s initial trial, where Slager had faced a possible life sentence, ended in a hung jury.

The chilling video footage helped fuel the Black Lives Matter movement that emerged around the 2014 police killing of Michael Brown in Ferguson, Missouri. It was seized on by many as vivid proof of what they had been arguing for years: that white officers too often use deadly force unnecessarily against black people.

Slager’s plea deal saved him a second trial in state court, where prosecutors were set later this year to try again to secure a murder conviction.

After the hung jury, many worried that, because the video seemed to some to be an open-and-shut case, they’d never see justice.

But it’s still possible the former North Charleston police officer — sent back Tuesday afternoon to the jail where he stayed for months after his arrest — will spend the rest of his life in prison if a judge gives him the maximum sentence. No date has been set for that hearing, and it will likely take several months for federal officials to prepare their pre-sentencing report.

Federal guidelines provide the framework for sentencing in U.S. District Courts, while ultimate discretion lies with the judge. There are various avenues through which defendants can argue for a lighter sentence, such as lack of prior criminal record or cooperation with authorities.

Prosecutors have recommended that Slager be given a slightly lesser sentence because he took responsibility for his acts, saving the government the time and expense of a trial.

Rene Josey, a former U.S. Attorney in South Carolina, now in private practice, said Slager likely wouldn’t have entered his plea without some degree of certainty the government would be able to convict him. When they’re brought, Josey said, federal cases like this one are likely to end in a guilty verdict or plea because the strength of the resources federal authorities are able to put behind their cases.

From his reading of the plea deal and associated sentencing guidelines, Josey said Slager likely faces an absolute minimum of one year in prison, with a maximum of life.

Regardless of where he serves his sentence, Josey said, Slager is likely pleased it’ll be in federal, not state, prison.

“I’d suspect a cop who shot a black guy would rather be in federal custody and not state custody,” he said. “Generally federal facilities are going to be more accommodating and better funded and more comfortable, more or less.”

The rarity of Slager’s case ending in a determination of guilt wasn’t lost on Scott’s relatives or their attorneys, who spoke with reporters after the hearing.

Both Chris Stewart and Justin Bamberg, whose work helped secure a $6.5 million settlement for the Scott family in their lawsuit against North Charleston, said the guilty plea both brings closure for their clients and sets an example for similar cases across the country.

“That is what we need to see all across the country, not just when there’s video,” Bamberg said.

Kinnard reported from Columbia, South Carolina. Reach her at http://twitter.com/MegKinnardAP . Read her work at https://apnews.com/search/meg%20kinnard .