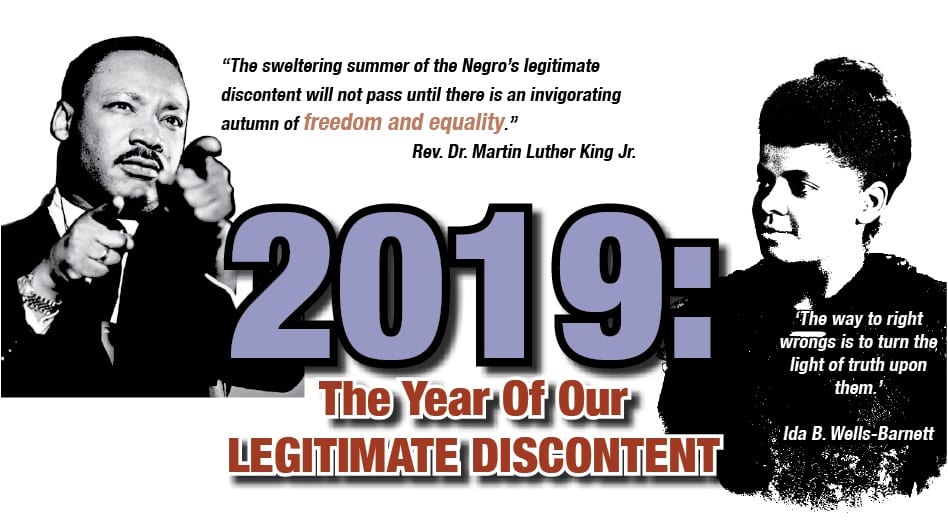 In August of 1619 the first enslaved Africans arrived on the shores of America in Jamestown, Va. Two hundred years later in 1819, the city of Memphis (named after Memphis, Egypt) was founded. As we enter 2019 and commemorate the quadricentennial of Africans in America and the bicentennial of Memphis, TN, one thread of consistency is stitched through the fabric of our history.

It is fair to ask one to speak of the progress that has been made in the country and the city of Memphis in the past 400 and 200 years, respectively. What might be more prudent to ask – and difficult to discuss – is this: Are we where we should be?

Progress is a relative term.  Malcolm X said, “If I stick a knife in your back nine inches and take it out six, is that progress?” The implication is, “No!”

Our appeals to a disassociated type of “progress” are diversions from weightier matters of accountability, justice and equity. They require, especially people of color, to yield to the sprinkles of tokenism and exceptionalism that serve as a demand for conformity, complacency and cowardice.  It is a demand to be satisfied with crumbs.

Have things changed? Absolutely. Are things better for people of color than they were 400 or 200 years ago?  In some ways, yes.

However, issues of segregation, poverty, exclusion, exploitation, miseducation and other forms of injustice continue to disproportionally impact people of color.

In his book “The Education of a Black Radical” the Honorable Judge D’Army Bailey wrote of the 1960’s something that rings true in the present.

“Negroes who claim to be satisfied with the present situation fall into one of three categories,” wrote Bailey.

“One, they are either too scared or they haven’t got enough sense; or two, they are making more profit from (the current situation) than they would from (a more inclusive and progressive one), and they like living in a luscious jail; or three, they’re lying to themselves and everyone around them.”

So, what do we deserve?  And how do we obtain it?

We deserve much more than crumbs and bare necessities.

The fruit of structural racism is the standardizing of white mediocrity and the suppression of black creative excellence. And we deserve full, equitable, inclusion into the society we have helped to shape, build and sustain. Until that goal is achieved, we must obtain and maintain a maladjustment to the injustice that continues to be normalized.

Mediocrity requires that we be content with basic, bare-minimum access and inclusion. Thus, we are asked to celebrate incremental improvements in wages, minority contracting, access to public funding for education and healthcare. Meanwhile, poverty rates, infant mortality rates and wage gaps remain amongst the highest in the country.

The foundational principle we must embrace to obtain what we deserve is the full-throated demand and support of black empowerment. We deserve to thrive. And Memphis (nor this country) will ever be all it can be until we embrace the full affirmation of those who make up the majority of Memphis and Shelby County.

I recall the evocation of Dr. King’s name in 2018 during the events surrounding #MLK50. What I do not remember hearing is that we must reclaim in 2019 King’s phrase from his famous, “I Have A Dream” speech.

Said King: “The sweltering summer of the Negro’s legitimate discontent will not pass until there is an invigorating autumn of freedom and equality.”

Ida B. Wells once wrote, “The way to right wrongs is to turn the light of truth upon them.”

Here’s the truth: our discontent is legit.

This is not a denial of any accomplishments. This is the acknowledgment of their inadequacies.

King, Wells and other venerable ancestors did not dismiss the factual plight of people of color despite certain forms of social and political advancement. Nor did they revoke the cries of the poor and disenfranchised as race-baiting ingrates. Their demand is that we obtain and maintain what we deserve.

When it comes to matters of truth, love and justice, I am an unapologetic extremist. This year – 2019 – cannot be the year of piecemealed, milquetoast appeals for more gradualism. Not if we hope to be great.

And I believe our greatness – the fullness of our potential – is what we deserve.

Let’s get to work.