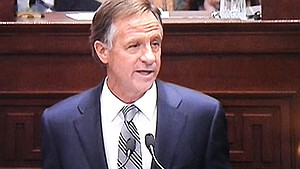 But K-12 education was also a focus, with a proposal to significantly increase spending for K-12 education for a third straight year. The 5 percent boost would go mainly to teacher pay, career technical education, English language learners, and charter schools.

In conjunction his seventh State of the State address, Haslam released a $37 billion proposed budget for 2017-18, including almost $183 million more for schools. While that’s slightly down from last year’s historic $200 million increase, Haslam said it’s still one of the largest education funding increases in the state’s history and amounts to fully funding schools under the state’s funding formula known as the Basic Education Program.

“Last year we had the largest funding increase for public education without a tax increase in the history of the state. This year we’re proposing one of the largest funding increases in Tennessee history while at the same time cutting $270 million in taxes. … Tennessee has shown it will not balance the budget on the backs of teachers and students,” said Haslam, noting that education spending has increased $1.3 billion under his administration.

Still, the proposed hike doesn’t cover all of the needs identified in a 2016 state report around counselors, technology, and instructional staff. In 2014, the most recent year for which data is available, Tennessee was 43rd in the nation for per-pupil spending.

Haslam has said he wants Tennessee to become the nation’s fastest-improving state on teacher pay and, as with the last two years, his single biggest proposed increase is for teacher compensation. The governor is asking for an extra $100 million there — equating to a 4 percent increase — on the tails of $200 million in similar increases since 2015. But if the legislature approves the spending plan, it won’t guarantee that teachers will see that boost in their paychecks. Ultimately, school districts have flexibility on how they spend that money.

The governor proposed $22 million more for the state’s growing school population of English language learners. And in keeping with a new focus on high school education, career technical education would get a one-time boost of $15 million. He also earmarked $4.5 million more for the state’s literacy initiative known as Read to Be Ready, as requested by Education Commissioner Candice McQueen.

His budget singles out the state’s 100-plus charter schools with a one-time $6 million bump to help pay for facilities, now a sore point for the state’s growing charter sector. Buildings, utilities and repairs take up a significant portion of charters’ budgets. And though it’s only a small part of Haslam’s spending plan, the line item signals his administration’s commitment to charter schools as a mechanism to improve public schools through competition.

The free community college proposal, known as Tennessee Reconnect, drew enthusiastic applause from state legislators. If approved, Tennessee would become the first state in the nation to offer all citizens — both high school students and adults — the chance to earn a post-secondary degree or certificate free of tuition and fees.

“Just as we did with Tennessee Promise, we’re making a clear statement to families: wherever you might fall on life’s path, education beyond high school is critical to the Tennessee we can be,” Haslam said.