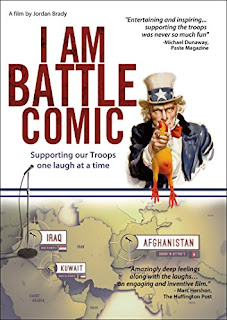 For over 50 years, Bob Hope served as emcee of the USO tour traveling overseas to entertain the troops. From World War II through Operation Desert Storm, Hope never hesitated to put himself in harm’s way. The well-received shows proved to be pretty popular back home, too, where they aired periodically on NBC.

Although no longer televised, an altruistic band of talented comedians have continued to venture to war zones in the wake of Bob Hope’s passing. Their unheralded efforts are the subject of I Am Battle Comic, a combination concert flick and documentary directed by Jordan Brady.

The inspirational film was shot on location in Iraq, Afghanistan, Kuwait and Bahrain, and stars 14 standup veterans, including George Lopez, Dave Attell and George Wallace, to name a few. While it’s certainly fun watching them perform onstage before very grateful audiences, what’s far more rewarding is the behind-the-scenes footage of them bonding with the soldiers.

For instance, we witness Lopez stick around after a show to sign an autograph for anybody that wanted one, over 1,000 in total. Then there’s Bob Kubota, who explains that he’s actually anti-war, and isn’t there for those who started or profit from the conflict. Rather, he wistfully recalls the satisfaction coming from receiving a letter from grateful parents thanking him for lifting the spirits of a son who’d been down in the dumps for eight months.

The picture also features funny archival footage of Bob Hope and Robin Williams. Still, what’ll probably stick with you longer than any witty one-liners are sobering moments like a weeping private’s heartfelt reflections on his service and a comic’s visit to an infirmary to chat with wounded warriors.

A moving concert flick that’ll make you laugh while bringing a tear to your eye in appreciation of our soldiers’ selfless sacrifices.

To see a trailer for I Am Battle Comic, visit:: https://www.youtube.com/watch?v=1e9Jg0-tOJ8

To order a copy of I Am Battle Comicon DVD, visit: