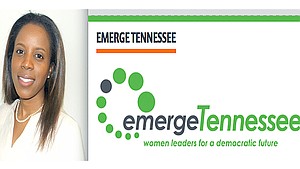 Emerge Tennessee has named a Memphis native as executive director. Kristal Knight, a former executive in the office of Washington, D.C. Mayor Muriel Bowser as well as a member of the team of presidential nominee Hillary Clinton, will officially join Emerge Tennessee on Feb. 21.

Emerge Tennessee is the 17th and southernmost affiliate of Emerge America, which “inspires Democratic women to run for office and hones their skills to win.” Emerge’s goal is to increase the number of Democratic women in public office.

“We are thrilled to have our first executive director to be a person of Kristal’s caliber,” said Emerge Tennessee Board Member Carol Brown Andrews.

“Kristal’s resume clearly shows that she has the drive and experience to help our board achieve our mission of recruiting, training and inspiring Democratic women across this state to run for office on all levels. This is the way we will build the bench and bring the political conversation back to where it belongs: to issues like healthcare, education, transportation, affordable housing and equal pay.”

Knight said, “I am excited to lead this effort because I believe in the power of women. When women lead, the world succeeds.”

Knight served as executive director and Chief Service Officer of Serve DC, the Mayor’s Office of Volunteerism for D.C. Mayor Muriel E. Bowser, was director of Marketing and Business Development for Capital Services Management, and an adjunct professor at the University of the District of Columbia.

She also served in the executive office of former D.C. Mayor Adrian Fenty as a Policy Analyst, as well as a radio and TV producer for Voice of America, and a Jumpstart Core Member at Americorps at Jumpstart Howard University. She is a 2013 graduate of Yale University’s Women’s Campaign School.

Her campaign experience includes organizing and field coordination for Hillary for America and Obama for America, as well as Volunteer Black Caucus and Faith Council Lead at the Democratic National Convention in Philadelphia in 2016.

“Emerge Tennessee is in the process of selecting its inaugural training class. Almost 50 women from Johnson City to Memphis applied for a class that will be about half that size,” Andrews said. “The women who have applied are tremendously impressive and driven. We closed the application date Jan. 31 and are still receiving queries about how to apply this year.”