By Sharee Silerio, The Root 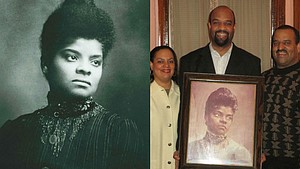 Editor’s note: For Black History Month, The Root is speaking to the relatives of our most cherished African-American heroes in a series called Living With History. To open the series, we interviewed a descendant of Frederick Douglass and Booker T. Washington. Today we feature Michelle and Daniel Duster, the great-grandchildren of Ida B. Wells-Barnett, renowned journalist, anti-lynching crusader, suffragist, civil rights pioneer and co-founder of the National Association for the Advancement of Colored People and the National Association for Colored Women.

Born a slave in Holly Springs, Miss., in 1862, Ida B. Wells was a brave woman who used her gift of writing, speaking and organizing to condemn injustice in the United States. For example, in 1893 Wells, along with Frederick Douglass, Irvine Garland Penn and Ferdinand Lee Barnett (her future husband), criticized the lack of black representation in the World’s Columbian Exposition by writing and distributing a pamphlet titled The Reason Why the Colored American Is Not in the World’s Columbian Exposition.

Michelle Duster is in her 50s and Daniel Duster is 48; both reside in Chicago and knew from an early age that they were related to Wells. In the following Q&A with The Root, they discuss how Wells’ legacy has influenced their life’s work, the impact of her fight against racism and sexism in America, and the importance of black history.

The Root: How has being Wells’ descendant impacted your life?

Michelle Duster: In addition to having many positive female role models in my mother, aunts, grandmother and other amazing women, the knowledge that my great-grandmother did so many things during a time when blacks and women had severe restrictions and [fewer] opportunities makes me think that I can achieve a lot in my life.

Daniel Duster: It has given me a sense of responsibility and duty to maintain high moral character and help others. Most of her descendants are doing well, educated and [doing] something to help their communities.

TR: What are you doing to continue Wells’ work?

MD: I teach and tutor writing at the college level and am also collaborating with others on writing projects. One is an anthology of essays, poems and artwork by African-American women about Michelle Obama’s impact as the first lady. The other is a sequel to the children’s history book Tate and His Historic Dream.

Dan and I are also working together on some writing projects that will help make our great-grandmother’s writing more accessible to people and give perspective into our own experiences.

DD: I do motivational speaking, training and coaching. I do keynotes and workshops for corporations and schools. I frequently incorporate things about Ida B. Wells into my speeches.

TR: How has Wells influenced what you are doing now?

MD: I am determined to do what I can to help African Americans’ voices be heard and stories be told.

DD: The biggest thing is helping me to overcome problems or fears. When I consider what she did and the things she had to go through, I know that I can face anything.

TR: What do you carry with you from her legacy?

MD: I have to deal with sexism and racism, and the legacy that I carry from my great-grandmother’s convictions is the idea that my voice is important and that I deserve the same opportunities, privileges and freedoms that white men enjoy.

DD: The knowledge that one person can make a difference and that oftentimes, being a leader may mean that you have to stand alone.

TR: If you could choose a fact, belief or lesson that the black community and/or America should carry with them about who she was and what she stood for, what would it be?

MD: To fight for what’s right.

DD: You must stand up for justice. Help those who may not have the voice or courage that you do.

TR: What do you think about the importance of black history?

MD: The contributions that African Americans made to this country are significant, and [it] should be imperative that everyone learn [their history] as [part of] American history.

DD: All history is important. Black history is especially important for African Americans because the way history has traditionally been taught or told doesn’t include the accomplishments of blacks or other races or cultures to the degree that it should [be] and is true. We need to dig deep for [black-history] facts and contributions to our country and pass that information along to our children with pride.

MD: The direction that our country is taking will force us to look to the past in order to forge ahead in the future.

DD: Many people look at leaders in history and think that there may have been something magical or that those figures were ordained or revered during their lives. Oftentimes it was just the opposite, and frequently was the case with Ida B. Wells—where they had little support and/or significant opposition, but they chose to do what they felt was right, what they felt was necessary.

It was their passion, their purpose, their convictions and their tenacity that made them who they were and helped them make an impact. We all have those same traits within us; it is up to each individual to dig deep, let their light shine and make an impact in their own way.