By Kelley D. Evans, The Undefeated 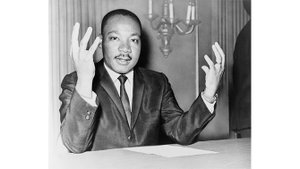 The following first appeared on ESPN’s The Undefeated.

“The labor movement did not diminish the strength of the nation but enlarged it. By raising the living standards of millions, labor miraculously created a market for industry and lifted the whole nation to undreamed of levels of production. Those who today attack labor forget these simple truths, but history remembers them.” – Dr. Martin Luther King Jr.

Many Americans around the country celebrate Labor Day annually as the last three-day weekend before the summer ends and cooler weather kicks in. True, but it is also a day of reflection for those who fought for an equitable job market for all.

Lee Saunders, president of the American Federation of State, County and Municipal Employees (AFSCME) wants to change that narrative of how many Americans think of the labor movement. Saunders wants citizens to be aware of King’s contribution to a cause that essentially was his last call to action before being killed in Memphis on April 4, 1968.

That’s why Saunders is heading a new campaign with AFSCME and the Church of God in Christ to commemorate the upcoming 50th anniversary of the Memphis sanitation workers’ strike and King’s “Mountaintop” speech. I AM 2018 was launched in June. The program entails holding town hall meetings across the country to spread King’s message of fairness and equality.

“It’s just not a commemoration, it’s activity, and it’s activity leading up toward the activities that will take place on April 3rd and 4th in Memphis, Tennessee, where on April 3rd we will recreate that level of excitement that existed when Dr. King gave his mountaintop speech, and then have a march leaving the union hall in Memphis and going to Mason Temple Church of God in Christ [where King made his final speech],” Saunders said. “But we’re also planning to have similar events around the country, so we really want this to be a major mobilization effort, No. 1 to understand our history, understand that we’ve come a long way since 1968 but we still have a long way to go, and to link that story with what we must do presently.”

For Saunders, the labor movement hits close to home, and so does King’s death. A leader of the labor movement in the United States, Saunders grew up in a union household in Cleveland, Ohio. His father was a bus driver and a member of the Amalgamated Transit Union. His mother was a community organizer and, after raising two sons, returned to college and became a community college professor and a member of the American Association of University Professors.

Saunders, the first African-American to serve as AFSCME’s president, began his career with AFSCME in 1978 as a labor economist, and he recalls King vividly.

“I was in high school and I remember when Dr. King was killed, and I remember the next day the African-American students who attended that high school walked out, walked out of school, and we gathered in downtown Cleveland to pay respect and to make a statement,” Saunders said. “That’s ingrained in my memory. I mean, we did that collectively. That was a collective action that those African-American students believed that we needed to take to recognize that Dr. King did not give his life in vain, that we have a responsibility. Our community has a responsibility, and folks who care about working families and the issues that affect all of us — all of us, not just a few but all of us — we have a responsibility to organize and mobilize and make our voices heard. I try to do that every single day.”

King’s support of unions was long-standing, although that endorsement was not returned by unions that did not allow African-Americans to join. In 1961, King’s address at the AFL-CIO’s annual convention was considered a turning point.

“Our needs are identical with labor’s needs: decent wages, fair working conditions, livable housing, old-age security, health and welfare measures, conditions in which families can grow, have education for their children and respect in the community,” he said. “That is why Negroes support labor’s demands and fight laws which curb labor. That is why the labor-hater and labor-baiter is virtually always a twin-headed creature spewing anti-Negro epithets from one mouth and anti-labor propaganda from the other mouth.”

Saunders now serves as a vice president of the AFL-CIO Executive Council, which guides the daily work of the labor federation.

By 1968, King would make his last attempt to stand up for the labor movement. Details of the sanitation strike once existed in an exhibit prepared by the Walter Reuther Library at Wayne State University.

“Wages and working conditions for Memphis sanitation workers were atrocious,” reads the online text from the exhibit. “The average pay was $1.80 an hour. The wages were so low that forty percent of the workers qualified for welfare and many worked second jobs.”

They lifted leaky garbage tubs into decrepit trucks and were treated unfairly. During foul weather, black workers were sent home without pay while the white workers were paid for a full day. There were no benefits, vacation or pension. The sanitation department refused to modernize ancient equipment used by the black workers. Black sanitation workers were called “walking buzzards.”

Aside from the pay and unfair treatment, it was dangerous. Two black sanitation workers, Echol Cole and Robert Walker, were killed when each was crushed to death in a garbage truck with faulty wiring. The families of the workers were given just $500 to pay for the funeral services and one month’s pay from the Memphis Sanitation Department.

As Saunders recounts those events, he reveals that moment when the members of Local 1733 AFSCME had to go out on strike for a change in conditions. King was right there to help lead the charge.

“That was something that was unheard of, but they were sick and tired of being disrespected and being mistreated, and they went on strike to have a seat at the table and for dignity and respect,” Saunders said.

Reflection on the true meaning of Labor Day prompts a short history lesson. Celebrated on the first Monday in September, the day was formed during the height of the Industrial Revolution to commend the contributions that workers made in building and strengthening their country, while also offering a day of respite for some. Founded after the Pullman Strike of 1894 gave railroad workers increased recognition, it ironically failed to include black Pullman porters in that same labor movement.

Black porters were a huge part of the workforce but were not allowed access to the American Railway Union. They later formed their own union, the Brotherhood of the Sleeping Car Porters, which was the first black union in America.

Given the fact that labor gaps exist right now, taking the day to remember the history of the labor movement, King’s contribution and the strides that influencers like Saunders are continuing to make, Labor Day should be more than just another three-day weekend at the beach or the mall.

Kelley Evans is a general editor at The Undefeated. She is a food passionista, helicopter mom and an unapologetic southerner who spends every night with the cast of The Young and the Restless by way of her couch.