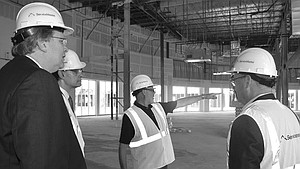 The sign draped outside still says, “The Future Home of ServiceMaster.” So, going inside of the long-empty building that once was Memphis’ downtown showcase mall required a hardhat.

There were plenty available, as were vests with laminated stripes, when Mayor Jim Strickland and several other guests toured the much-prized renovation project on Wednesday morning.

“A lot of work has gone into this thing and we’re not even half way done with it,” the ServiceMaster guide said. “Phase one kicked off a couple of months ago…(During) … phase two …we’ll be doing construction until the end of the year.”

Gone are all of the shops, businesses, sights and sounds that were Peabody Place in its all-too brief heyday. Construction workers busied themselves with assorted tasks, only momentarily pausing for the touring observers.

“I thought it was fantastic,” Strickland said after taking in all the info about what has been done, what used to be where and what is to come.

“Two years ago, I don’t know that anyone in Memphis could have envisioned what to do with this large, empty mall. Now it’s being transformed into a very cool office space that’s bringing 1,200 jobs downtown.”

With ongoing and rising concerns being expressed about minority participation in local construction projects, Strickland was asked if he were satisfied with such participation in the endeavor.

Said Strickland: “I’m told when they release the numbers that we will be pleased.”