By Kirsten West Savali, The Root 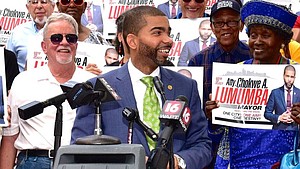 The votes are in. Winning over 55 percent of the vote against eight other candidates, attorney Chokwe Antar Lumumba, 34, son of late Jackson, Miss., Mayor Chokwe Lumumba and community activist Nubia Lumumba, has won the Jackson, Miss., mayoral primary race.

Jackson Mayor Tony Yarber conceded earlier in the evening Tuesday and said that he was throwing his full support behind Lumumba, who is poised to not only continue the radical and transformative work that shaped his parents’ lives—and his own—but to lead Jackson into a revolutionary future.

Chokwe Antar Lumumba ran and lost the 2014 mayoral election to then Councilman Yarber. At the time that he announced his candidacy in the wake of his father’s unexpected death after less than a year in office, Lumumba made it clear that he was not running on his family’s name, but on his credentials and commitment to his people and the city of Jackson as a whole.

Upon losing the close race, Lumumba wrote these powerful words:

A great man once said, “Our Movement is not measured by the size of the crowd. … But by the size of our revolutionary hearts.” That man’s name is Chokwe Lumumba. Tonight, I stand proudly with each of you. I stand proudly knowing that we fought this battle with integrity, compassion, selflessness, hope & most of all, Love… Love for our great city and its great citizens. We were told by many that we were too young, too inexperienced, too progressive- for City Hall, perhaps… But not for the City of Jackson. I’d submit to you that the only thing we are too young or too progressive for is believing that our work stops with the vote… It most certainly does not. Our goal is to work to make Jackson Rise for all of our citizens…not just some. With that being said, The People’s Mission continues… It continues and it does not stop for us…Free The Land! FREE the Land! FREE the Land! For the Work…We do for the people…Did not stop today. WE, will continue to rise as a city together. I love you and I thank you…Jackson rises…Together we rise!”

Lumumba is managing partner of Lumumba & Associates and a member of the Malcolm X Grassroots Movement. He received his Bachelor of Arts degree from Tuskegee University in 2005 and earned his juris doctorate and a certificate in sports and entertainment law from the Thurgood Marshall School of Law at Texas Southern University in Houston.

Lumumba is a founding member of the Mississippi Human Rights Collective, co-organizing the “Stand Up to Take It Down” rally at the state Capitol to support the removal of the Confederate battle emblem from the Mississippi state flag. He currently serves as the media representative of the Coalition for Economic Justice and was instrumental in co-authoring “The People’s Platform.”

Lumumba will face off against a field of candidates—including Republican primary winner Jason D. Wells; independents Jaclyn Mask, Gwen Ward Osborne Chapman and Kenneth Swarts; and Libertarian Corinthian Sanders—in the general election June 6, but he is assumed by many energized and hopeful Jackson citizens to be the city’s next mayor. A matter of decorum gets City Council’s attention