By Brianna A. Smith, [email protected] 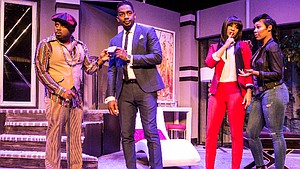 If you’re looking for a fun evening for you and your significant other, comedian/actor Bill Bellamy knows of a stage play in Memphis this weekend that just might do the trick.

Tickets on sale at:

all Ticketmaster locations, and The Cannon Center

“Married But Single Too is a perfect date night,” said Bellamy, who plays “Jackson” in the three Memphis performances at The Cannon Center this weekend. “The audience will experience more singing, more love, more fun and more of the funny.”

Written, directed and produced by playwright Je’Caryous Johnson, “Married But Single Too” portrays the struggles of being married but feeling single, and being single yet desiring the commitment that comes with marriage. It’s a sequel to his earlier outing “Married But Single.”

Sharon issues an ultimatum: end the tour or end their marriage. Not ready to close the door on either part of his life, Julian’s indecisiveness opens the door for Sharon’s old flame, Jackson (Bellamy), who is also “married but single.”

“The entire cast is so talented,” Bellamy said. “It has been great being a part of such an awesome show. We’re looking forward to bringing a grand performance to Memphis that our Memphis audience will

“The story is so relatable. The acting and singing is phenomenal,” Bellamy added. “ ‘Married but Single Too’ is a really outstanding stage play to see!”