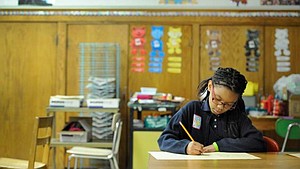 It’s not just Memphis: Across Tennessee, districts with many struggling schools posted lower-than-expected growth scores on this year’s state exams, according to data released Tuesday.

The majority of Tennessee’s 147 districts did post scores that suggest students are making or exceeding expected progress, with over a third earning the top growth score.

But most students in three of the state’s four largest districts — in Memphis, Nashville and Chattanooga — aren’t growing academically as they should, and neither are those in most of their “priority schools” in the state’s bottom 5 percent.

“These results point to the ability for all students to grow,” she wrote of the top-performing districts, many of which have a wide range of academic achievement and student demographics.

Of those in the bottom, she said the state would analyze the latest data to determine “critical next steps,” especially for priority schools, which also are located in high-poverty communities.

“My message to the leaders of Priority schools … is that this level of growth will never get kids back on track, so we have to double-down on what works – strong instruction and engagement, every day, with no excuses,” McQueen said.

Growth scores are supposed to take poverty into account, so the divide suggests that either the algorithm didn’t work as it’s supposed to or, in fact, little has happened to change conditions at the state’s lowest-performing schools, despite years of aggressive efforts in many places.

The results are bittersweet for Tennessee, which has pioneered growth measures for student learning and judging the effectiveness of its teachers and schools under its Tennessee Value-Added Assessment System, known as TVAAS.

On the one hand, the latest TVAAS data shows mostly stable growth through the transition to TNReady, the state’s new test aligned to new academic standards, in the first year of full testing for grades 3-11. On the other hand, Tennessee has invested tens of millions of dollars and years of reforms toward improving struggling schools — all part of its massive overhaul of K-12 education fueled by its 2009 federal Race to the Top award.

You care about education. So do we. Donate now to support our nonprofit journalism.

The state-run Achievement School District, which launched in the Race to the Top era to turn around the lowest-performing schools, saw a few bright spots, but almost two-thirds of schools in its charter-reliant portfolio scored in the bottom levels of student growth.

Shelby County’s own turnaround program, the Innovation Zone, fared poorly too, with a large percentage of its Memphis schools scoring 1 on a scale of 1 to 5, after years of scoring 4s and 5s.

Superintendent Dorsey Hopson called the results a “wakeup call” for the state’s biggest district in Memphis.

“When you have a population of kids in high poverty that were already lagging behind on the old, much easier test, it’s not surprising that we’ve got a lot of work to do here,” he said, citing the need to support teachers in mastering the state’s new standards.

You can find district composite scores below. (A TVAAS score of 3 represents average growth for a student in one school year.) For a school-by-school list, visit the state’s website.