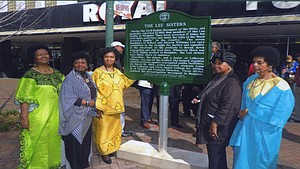 The resolution says the Lee sisters were essential in the fight against the injustices of the Jim Crow era, devoting themselves to the Civil Rights Movement both locally and nationally.

As high school and college students, the Lee sisters took part in protests throughout the Memphis area and were arrested 17 times; earning them the title of “Most Arrested Civil Rights Family” by JET magazine. Different members of the family also participated in the 1963 March on Washington, the Selma march over the Edmund Pettus Bridge in 1965 and the Meredith March against Fear in Mississippi in 1966.

The Lee Sisters were honored by the NAACP in 1965 and recently received a historic marker by the African American Museum of Memphis and Shelby County Historical Commission at the corner of Main and Gayoso streets in Memphis.

“It is a privilege to recognize the Lee Sisters, my sisters in the movement, who sacrificed their futures so that others would have a better one,” said Turner.