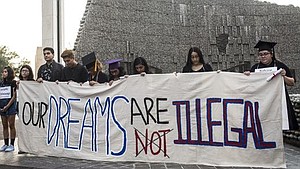 Leaders of Tennessee’s two largest school districts pledged their support Tuesday for students and families impacted by President Donald Trump’s decision to phase out federal protections of young people brought illegally to the U.S. as children.

Meanwhile, Education Commissioner Candice McQueen urged all of the state’s school superintendents to “educate all students regardless of immigration status.”

“We want all students to feel safe and welcome in Tennessee’s classrooms, and we want families to feel included in their school communities,” McQueen said in a statement.

In Memphis, Shelby County Schools Superintendent Dorsey Hopson weighed in on Twitter, just hours after U.S. Attorney General Jeff Sessions announced that the government will no longer accept new applications from undocumented immigrants to shield them from deportation under the Deferred Actions for Childhood Arrivals program, known as DACA.

Metropolitan Nashville Public Schools, which has Tennessee’s largest immigrant student population, quickly called on Congress to pass a DREAM Act or other legislation similar to DACA.

The decision to end DACA launches a year of uncertainty for many students and recent graduates across Tennessee, where about 8,000 young people are enrolled in the program.

Among them is Cesar Rodriguez, a DACA recipient in Nashville, who credits President Barack Obama’s 2012 executive order for changing his outlook on life.

“Growing up, I always knew I wanted to get a college education that would afford me better opportunities for my future and help me find work doing something that I loved, but because I was undocumented, I didn’t think I’d have a chance. DACA changed everything,” Rodriguez said in a statement shared by the Tennessee Immigrant and Refugee Rights Coalition.

Trump is urging Congress to replace the executive action with legislation before the program begins phasing out beginning next March 5.

Tennessee’s congressional delegation was mostly split along party lines on whether the phaseout is wise.

Rep. Steve Cohen of Memphis called the decision “heartless, illogical and un-American,” while Rep. Marsha Blackburn hailed it as a corrective measure to “uphold the rule of law our country was founded upon.”

“I look forward to working with my colleagues in the coming months to fix our broken immigration system and establish laws that encourage immigrants and their families to come here legally,” said Blackburn, a Republican from Franklin.

Either way, school boards for both Memphis and Nashville are on record in their support of immigrant students. Both have pledged to protect student privacy and restrict the release of confidential information about immigration status to agencies that enforce those laws.

Nashville’s board pledged its commitment to diversity in the wake of Trump’s election last fall amid a wave of anti-immigrant rhetoric.

Shelby County’s board approved a resolution just last week supporting students, regardless of their immigration status. The unanimous vote was in response to arrests this summer during a series of federal raids in Memphis targeting people who have entered the United States illegally.