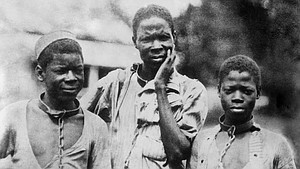 It was my first time visiting the National Museum of African-American History and Culture, and the nameplate read “Araminta Ross.” I stood in disbelief as if someone was going to pull my Black Card, because while I knew the story and the face, I had no idea that Harriet Tubman’s real name was Araminta Ross.

It was then I realized that my U.S. education was questionable at best, as I knew my own ancestors only by nicknames and pseudonyms.

The kindergarten through 12th grade education system, like most America systems, is an oppressive structure that serves as the catalyst to the erasure of black history, which ultimately is American history. Unfortunately, black history is often treated and disseminated as a small footnote in America’s comprehensive history, and even then, said black history comes with major gaps between the start of the Transatlantic Slave Trade and now.

The use of major event markers in our history tend to focus black history around three very pivotal time periods in the United States for African Americans: slavery, the Civil Rights Movement, and the election of Barack Obama.

Our story is often characterized as one of “progress,” yet the fact that we were fully civilized in Africa prior to the invasion of Europeans often gets lost. The colonization of black people was and is a part of the conditioning process that causes us to understand our history through a white lens. This whitewashing of our history has been a hotbed for white supremacy, and black Americans have subsequently, and unknowingly, assimilated into it.

That assimilation was the reason that I fought to play the lead role as Abraham Lincoln in a Black History Month school play called “This Land is Your Land” in the third grade. As black children, we are taught white history by default and it’s often in the context of the “savior complex.”

The white forefathers were depicted as catalysts for change, who stood up against the oppressive powers of Britain, yet our own Constitution once considered blacks three-fifths a person and only gained the right to vote through an amendment to the original supreme law of the land.

Slavery itself is even watered down in history books, often taught as if it were simply a mistake or decision that went too far. This rather than the truth, which is that the system of slavery was the foundation of our economy, and a top commodity for which many of our current financial institutions such as Bank of America and Wells Fargo, gained their initial capital.

President Lincoln is then sold as the American Hero who saved black folk with his “Emancipation Proclamation,” reinforcing the notion that black freedom can only come at the hands of a white man with a good heart.

I remember Black History Month in elementary school being as celebratory as Halloween. We were allowed to dress like our favorite ancestors and feel empowered, even if only for a limited time. Much of my history was taught to me by white teachers, using white-centered textbooks, whitesplaining our history in effort to soften the blow of what happened to our people versus what is told. This pipeline of erasure continued throughout middle school and high school. By the time I reached high school, learning history became a choice that almost never included black history.

Every construct in education was used to erase the power, presence and significance of black people outside of how they helped white people. The biggest offense, however, has been the conditioning of our history, which is reduced to one month of recognition and not all year round. The unfortunate truth about this conditioning is that it happens subconsciously and can only be broken when noticed. Breaking that conditioning takes years, and for many in the black community, that revelation never happens.

The instant disassociation with black history once March 1 rolls around every year is not done purposely, as much as it was by design. While black people wait all year to celebrate this month, much of our country can’t wait for it to end. To be sure, there’s a strong correlation between the suppressing of black history and how it’s celebrated. Allotting only a few short weeks to celebrate our history is very much like a token of appreciation for all the work we have done in this country. The challenge is, as with every structure of oppression, making the necessary changes to how we engage black history will likely not happen without white validation. Otherwise any attempts to change the narrative falls on death ears, because: racism.

With black history, however, we have an opportunity to circumvent that system in our own homes and communities. What if, we as a people decided to teach our youth outside the classroom? What if we decided that one month is simply not enough, and created our own celebratory days that happened each month to spread our important and rich history throughout the entire year?

With the use of social media as a vehicle, we are now able to celebrate our history whenever we want. Hash tags like #BlackJoyMatters, #BlackLivesMatter, #AllBlackEverything are now used as ways to trend our stories of triumph and tragedy as a record-keeping tool to preserving our culture.

That day in the National Museum of African American History and Culture changed my life forever. Although I felt as if my entire blackness was about to be called into question, I knew that it was nothing that I had done wrong. It was the system rather that had done me and my people wrong.

Going forward, we as black people have a call to duty. If the education system is unwilling to teach our history, then we must do it ourselves. Black History is American History. And there is no system that could ever change that.

(George M. Johnson is a journalist and activist based in the Washington, D.C. area. Follow him on Twitter: @iamgmjohnson.)