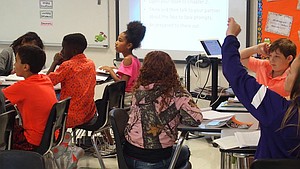 Among the first states to submit its plan under the new federal education law, Tennessee is also among the first to gain approval from the U.S. Department of Education — but with one key adjustment.

Education Commissioner Candice McQueen has tweaked Tennessee’s plan to try to keep certain groups of historically underserved kids from falling through the cracks under the Every Student Succeeds Act, known as ESSA.

n April, the state proposed lumping black, Hispanic and Native American students into a single “supergroup” when considering interventions in schools where those students were struggling more than their white peers. The approach raised red flags both in Washington, D.C., and some corners of Tennessee, for fear that differences between the various groups could be overlooked.

In July, the U.S. Education Department told Tennessee to revisit that point. It urged the state to put more teeth behind its plan to individually track those student groups, as well as Asian, Hawaiian and Pacific Islander and white students.

The plan that gained federal approval on Wednesday takes both approaches — enabling the state to intervene when any of those groups fall far behind their peers.

The change means that even schools with high test scores could be on the hook for big changes if at least 30 black, Hispanic and Native American students in that school aren’t keeping up.

And if, for example, a significant number of Native American students are performing worse than black or Hispanic students at a single school, the state will respond to that, too.

“Ultimately, all of these approaches will help to shine a spotlight on all students’ performance and drive a conversation about the needs of individual students,” McQueen told superintendents in an email announcing the state’s ESSA plan approval.

She also assured them that the change will not significantly increase the number of schools being tracked. (For monitoring to kick in, schools have to meet the 30-student threshold for any group.)

A successor to the more restrictive No Child Left Behind law of 2001, the ESSA law of 2015 gives states latitude to come up with their own plans to improve student achievement and hold schools accountable for student performance.

Tennessee’s plan is the result of nearly two years of gathering feedback across the state. But a sticking point has been how to identify and rate schools in need of targeted support for certain groups of students.

The adjusted plan is getting good marks with groups advocating for a change.

“We are thrilled. We are celebrating that change,” said Gini Pupo-Walker, senior director of education policy for Conexión Américas and leader in the Tennessee Educational Equity Coalition.

If schools are on the hook for how they serve all students, they are more likely to make meaningful changes to improve education for them, she said.

“People will adjust resources and staffing decisions based on performance in this new accountability framework. Our whole belief with accountability is it will inspire or spur action,” said Pupo-Walker.

Tennessee is among nine states and the District of Columbia that have now gotten the green light on their ESSA plans. The remaining states are expected to submit their plans in September.