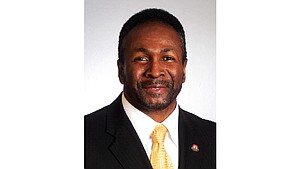 Just 20 years ago, Leon Dixon Sr. might have best been known as a barber. He had gotten his real estate license back in 1988, but his main focus was still on running his beauty salon, which he still owns on Winchester Boulevard. Given that he’d grown up in South Memphis with nine other siblings, owning a successful salon might have been a decent happy ending.

But health issues drove him out of the day-to-day operations of the salon. And, still needing to earn for his family, he turned back to real estate, where he flourished. As owner of BENCHMARK at Southwind Realtors LLC, Dixon has racked up several successes, including REALTOR® of the Year by the Memphis Association of Realtors in 2012 and BenchMark Realtors’ 2005 Top Producer of the Year award for real estate and mortgages.

Fast-forward to today. Dixon, who has two adult children with his wife Mary Joyce, was just inaugurated as president of the Tennessee Association of Realtors — the first African American to hold the position. It’s a distinction Dixon downplays; he’d rather focus on the motivation and hard work that got him where he is, as TSD Associate Editor Lee Eric Smith learned in a one-on-one conversation.

Lee Eric Smith: When did you first take an interest in real estate?

Leon Dixon Sr.: It’s sort of strange how it happened. I own a beauty salon and I was working as a stylist. My oldest sister was already in real estate, so in 1988, she suggested it to me. I took the course, passed it, then I started selling real estate, but I still spent most of my time in the salon.

In 2003, I had Lasik surgery and I couldn’t stand the hair sprays and all that stuff in the salon so I transitioned completely out of the salon and turned to real estate full time. I worked for other real estate companies for about seven years, then opened my own company, BENCHMARK at Southwind. And that same sister that talked me into real estate? She works with me at my company now. My youngest brother too. It’s all in the family.

LES: Growing up here in Memphis and entering the industry, on to where you are now, you must have some insights into real estate. What transformations have you seen over the years?

So we saw a lot of neighborhoods that were really devalued because of the drop in the industry in the market. A lot of those neighborhoods have come back 100 percent and have exceeded what they were before the market crash. And some are still creeping up the slope.

LES: What do people who are thinking of buying or selling really need to understand in the Memphis market?

Dixon: Back in 2008, properties were really depreciated. It was a buyer’s market — buyers had a choice. They were in control, they were in the driver’s seat. A buyer could get a seller to do almost whatever they wanted because there were so many houses on the market.

Well, now, that market doesn’t exist. Now, we have a seller’s market. We don’t have a lot of inventory, so that means that sellers are in the driver’s seat. Now, you may have five or more people trying to buy the same property. which causes that sale to go in to what we call the multiple offer situation. If a seller is asking $140,000, they’re likely to get it.

LES: What kind of perspective do you expect to bring to the Tennessee Association of Realtors as an African American?

Dixon: I don’t look at it as being the first black or the first African-American. And I’ll tell you this: I know there were people who came before me that paved the way, OK? But since I’ve been involved in this organization, I have not had any pushback for me being able to move forward.

And I understand your question. But what I really hope comes out of this is not so much is that I’m the first black president. What I hope is that this motivates all kinds of people of the possibilities that they have. There’s no limit to what they can do. So if this motivates somebody, then that’s what I want to see — doesn’t matter if they’re black, white or whatever.

But in order to get to that point, you have to cross over the challenges and all of those things that we use as excuses not to do better than what we’re doing. So that’s what I hope to motivate people to do.

LES: If we were going to draw the “Leon Dixon Map to Success” — from South Memphis to where you are now . . .

Dixon: I can give you the map. When I graduated from high school I did construction work for a while and from there I transitioned to Baptist Hospital and worked there. Of course, I worked at my salon.

But the thing that sticks out most to me was when I was about 19 or 20 years old. I was working at Baptist Hospital and no matter how hard I worked, my paycheck was the same. I realized this was not going to work. I was allowing someone else to control where I lived, what I drove, what I ate, what I wore.

I promised myself that I would get myself out of this situation, because I had a son and I was a single parent at that time. I worked three jobs, started getting on my feet real good. Saved up my money, bought the building on Winchester and opened up my salon. And then I transitioned to real estate. But in all those transitions, I was always taking a step forward, a step up.

Dixon: I made a lot of sacrifices. And I’m not saying everyone has to take the route that I took. I had to stay focused and determined to reach my main goal. And my main goal was to provide more for my child than I had.

When I was growing up, my dad did construction work and when he would go to different neighborhoods like Germantown. We see these nice houses and nice cars. And wondered would we ever be able to afford anything like that.

And I remember clearly, when I was about 18 years old, thinking to myself, “Wow, I bet I’ll never own a new car.”

Well, now I’ve had several new cars. And I’m not bragging. It’s about just reaching that point where you realize you want to do better than what you’re doing. And you have to find something to motivates you.

Finding motivation to me was the key. Once I got that motivation with my family — that I wanted to provide for them and give them more than what I had — once I got that, it never let me stop or lose focus.