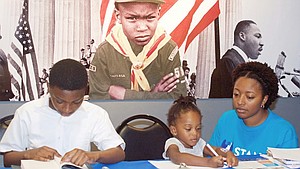 Memphis is as segregated as it is today because of a series of historical twists and turns, as well as recent decisions that deepened the racial divide, a panel of experts said Tuesday night.

About 50 residents attended the discussion on Memphis’s history and present state of segregation. The event was the kickoff of a speaker series led by the National Civil Rights Museum MLK50 project, Stand for Children and the Tennessee Educational Equity Coalition.

For one teacher, the discussion was eye opening.

“I am taking away the tremendous impact history has had on current segregation in Memphis,” said Kayleigh Bondor, a special education teacher at Hillcrest High School.

Here are three takeaways from the discussion:

In 1961, 13 black students in Memphis were the first to desegregate schools in Shelby County. But like in cities across the nation, desegregation didn’t take hold the way its proponents had hoped, Kiel said.

“The response was substantial,” Kiel said. “In the time between the order for busing and the following school year, 20,000 white students disappeared from Memphis City Schools. Some moved out of the city, and some went to private schools created for them.”

“This marks the end of desegregation in Memphis,” Kiel said. “From this point on, (Memphis schools) become increasingly black.”

The pattern had potential to change but didn’t in 2013 when the Memphis City School system gave up its charter and merged with legacy Shelby County Schools. The historic merger led to a “demerger” the following year, when six suburban towns pulled away to form their own districts. The Memphis-suburb splintering was recently highlighted in a national study on school secession.

Kiel called the merger/demerger a “missed opportunity to have a conversation about segregation.” Today, Shelby County Schools serve a majority black and poor population, while the suburban school districts remain more affluent and white.

2) Historical reverence for black teachers needs to be re-ignited if schools are to improve.

When growing up in Chicago, Freeman said, it was clear that African-American public school teachers were trusted and respected. That was true in black schools across the country before desegregation, but it’s no longer true now. And that has to change.

“When I think of the 1950s and 1960s, I think of teachers as being those who were elevated and put on a pedestal in African-American communities,” Freeman said. “We have really dismantled teaching as a profession, in part by seeing teaching as something you do for a couple of years and move on.”

Freeman takes issue with the prevalent philosophy that “anyone can teach,” demeaning the profession and dis-incentivizing the need to have a degree in education or master’s degree.

“When it appears that the desire is for us to groom young white people to teach young black kids, when you create methods of now certifying teachers that don’t require higher education or a masters education, there’s a message that sends,” she said, adding, “We don’t need a revolving door.”

Recently, Shelby County Schools has set out to change the way parents and students apply into its optional schools program, which started in the 1970s as magnet programs to compete with private schools for high-achieving students.

“They are used to filter students into honors programs, and that’s why the optional program in Shelby County Schools looks the way it looks,” said McKinney, who later added that he has a son in an optional program. “There are no mysteries here. The way in which our school system is structured is a direct result of segregation practices and policies.

“Want to kick up a hornet’s nest?” he added. “Go and try to change the optional programs. It’s one of the most racist programs in the country. What percent of students in optional programs are African American?”

Specifics on the optional program demographics aren’t publically available, but panelists agreed that the optional schools cater to a higher percentage of white, affluent students than Shelby County Schools as a whole, which is 78 percent black and 60 percent economically disadvantaged.

Kiel added that the optional program was created by the school system to attract families like his — white and middle class.

“Optional schools were designed to bring people like me into a school system that was bleeding white people every single year,” he said.