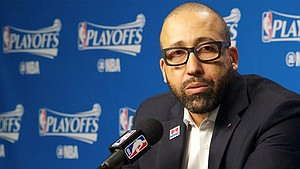 Sports changed the trajectory of my life. If it had not been for the game of basketball, I likely never would’ve made it out of Benton Harbor, Mich. I probably never would’ve landed in Memphis almost 20 years ago.

As far back as I can remember sports have schooled me, teaching me about life. For years my mother would lecture me to, “Play basketball. Don’t let basketball play you.” Her insight was intended to direct me to see past the horizon of the lines and into the broader structures of life.

I recall my freshman coach, Lou Harvey, philosophizing about how “the ball has eyes.” Later I find out that means there are certain things in life that don’t have to be forced, they just happen in their own way, in their own time. My junior college coach, Doug Schaffer, taught me the importance of sacrificing individual gains for team glory. I was the best scorer on my Junior College team, as well as the best passer and ball handler. This mandated me to have to focus more on getting my teammates involved, putting other people in positions to be most successful to improve the potential of my team winning.

Legendary LeMoyne-Owen Coach Jerry Johnson (and his spunky assistant Curtis Hollowell) shared many insights with me that I am unable to repeat publicly without retribution. They are responsible for teaching me the need for a unique brand of competitive tenacity that is willing to go against even the most obvious odds. They also helped me to racialize the game enough to recognize how athletes have been conditioned to respond to white coaches differently than black coaches.

Recently, a passionate, righteous and rage-filled response to a Game 2 loss by the Memphis Grizzlies at the hands of the San Antonio Spurs (arguably with a little outside help) has caused what I’ve learned about and lived from the game to resurface. Head Coach David Fizdale mounted the post-game-press-conference podium, and in 2.5 minutes, meticulously laid out clear and concise statistics contextualizing the disparities in officiating that gave an unfair advantage to one team over the other. All across the city we saluted this young African-American coach for his justifiable rage, passion and courage to speak out irrespective of consequence.

Coach Fizdale exemplified the necessity of paying attention to the details. He implored all of us to raise our consciousness – to #StayWoke. He was providing for us a methodology describing how people will try to treat some human beings as if we are unworthy of fair and just dealings based upon where we’re from, how long we’ve been where we are, and, yes, even what we might physically look like.

Coach Fizdale reminded me of the importance of using our platform in service of others and not simply in service of self. In this regard, he reminded me of why we advocate for social justice and black liberation all across the city. Ironically, most of us are ridiculed for our righteous indignation.

Grizz fans didn’t allow a lackluster first half to compromise our ability to acknowledge injustice when we see it. Nobody cited blame black-on-black crime as the source for the officiating disparities.

And the injustice in our communities is equally obvious.

One player for the Spurs shooting more free throws than the entire Grizz team is almost as bad as the top 20 percent of earners in Memphis bringing in more than half – 50.7 percent – of the whole city’s income.

We’ve found millions of PRIVATE dollars for police departments and bridge lights, the city council is even considering a dog park…but we’ve given zero dollars to PUBLIC education.

Take that for data.

But, maybe Coach Fizdale and the Grizz can teach us something about The Movement for Black Lives and something about our own personal responsibility to be involved in the struggle for freedom. It is incumbent upon all of us to recognize the places where righteous indignation and visual resistance are the most adequate expressions and responses to injustice. We ought not be more readily embracing of those who advocate for justice for athletes than those who are a lot more unfortunate.

Let’s find ways to affirm, resource and reconsider those who fight for justice at the grassroots level because we all have a duty to be informed and insightful. In this current climate it is just as bad to be loud and wrong as it is to be right and silent.

Dr. King was right; injustice anywhere (even on the hardwood) reflects the threat to justice everywhere. And Malcolm X was equally righteous when he said, “I’m for justice no matter who’s against it. And I’m for truth no matter who’s speaking it!”

(The Rev. Earle J. Fisher is senior pastor of Abyssinian Baptist Church and co-spokesperson for the Memphis Grassroots Organizations Coalition.)