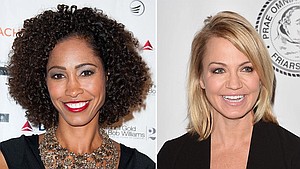 Sage Steele is being replaced at ESPN ahead of the NBA playoffs.

Steele recently found herself under fire for complaining about protests against Donald Trump as well as for an abrupt end to an interview with Arcade Fire lead singer Win Butler when Butler started to voice his political views. Viewers called for a boycott of “NBA Countdown” in protest of Steele’s behavior.

That might be part of the reason ESPN has made such a change so late in the season, with this announcement that Steele would no longer be allowed to host one of the biggest events for the network: “ESPN today announced that Michelle Beadle has been named the full-time host of NBA Countdown on ABC and ESPN. In this role, Beadle will lead the company’s NBA pre-game and halftime shows, including for the NBA Finals on ABC. She will also host ESPN’s and ABC’s studio coverage throughout the NBA Playoffs, which includes ESPN’s exclusive coverage of the Western Conference Finals.”

“The only thing better than working for Connor Schell and Kevin Wildes is being able to spend each day with all of the incredibly talented people at NBA Countdown and SportsNation,” Beadle said of the new opportunity. “It’s the best job in sports.”