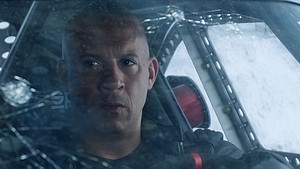 There are a number of action films whose opening scenes alone are well worth the price of admission. Taken (2008), District B-13 (2004) Super 8 (2011) and Dawn of the Dead (2004) are four which automatically come to mind. Feel free to add The Fate of the Furious to the list of flicks that grab you by the throat right off the bat.

The fun starts in Cuba, which is where newlyweds Dom (Vin Diesel) and Letty (Michelle Rodriguez) are happily honeymooning. But their nuptial bliss is interrupted when Dom comes to the rescue when a repo man threatens to cart off his cousin’s vintage jalopy.

Dom talks the guy out of towing and into a drag race to settle their differences. What ensues is heart-stopping careening around the colorful streets of Havana leading to a crowd-pleasing photo finish right at the ocean shore.

Next, we find the bride and groom relaxing back at the hotel. Letty, aware of her biological clock ticking, brings up the idea of starting a family. However, before they decide, Dom goes for a fateful walk alone during which he stops to lend a hand to a damsel ostensibly in automobile distress (Charlize Theron).

Truth be told, it’s Cipher, a cyber-terrorist bent on world domination through the acquisition of a gizmo capable of shutting down the electrical grid. She blackmails Dom into joining her criminal enterprise by showing him something very incriminating on her cell phone.

Just like that, the stage is set for a high-octane battle of brawn, muscle cars and wits which has Dom squaring off against his wife and a reassembled gang composed of returnees: Hobbs (Dwayne Johnson), Tej (Ludacris), Ramsey (Nathalie Emmanuel) and Roman (Tyrese) as well as new team leader Frank (Kurt Russell), his awkward assistant Eric (Scott Eastwood) and ex-villain Deckard (Jason Statham).

Forget the idea of following the plot. It’s messy and there are way too many characters to follow. Just sit back and soak in the spectacular stunts, the playful badinage between Hobbs and Deckard, and the comic relief coming courtesy of Roman.

It may only be April, but here it is, the year’s first, bona fide summer blockbuster! .